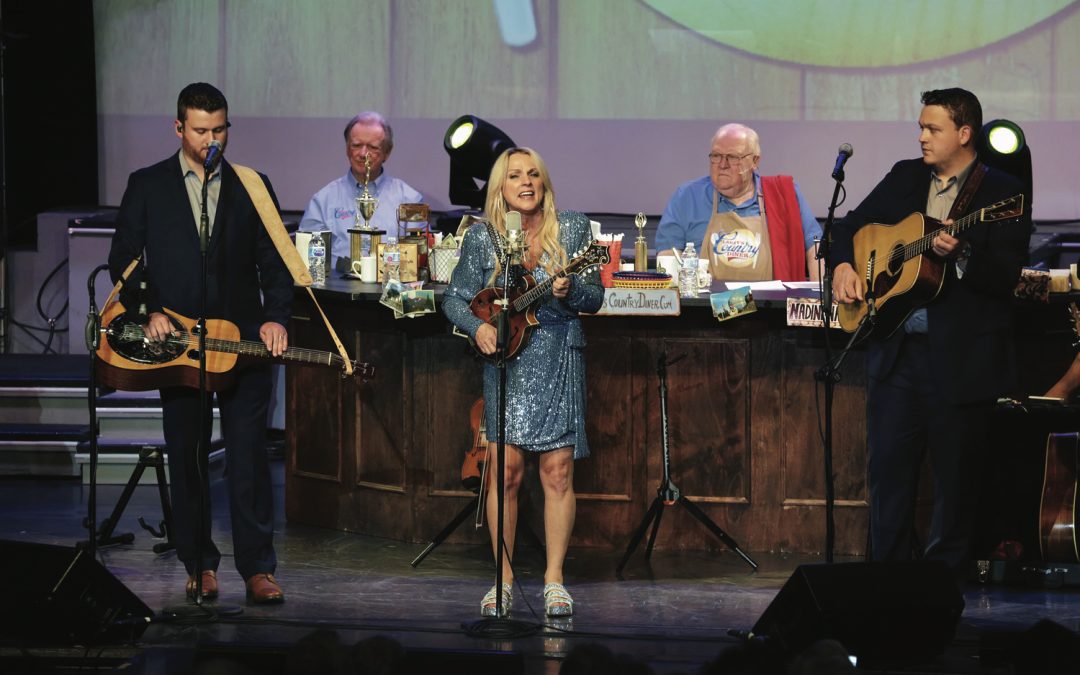 The Queen of Bluegrass, Rhonda Vincent, was inducted as the newest member of the Grand Ole Opry on March 28, 2020. The invitation to join the Opry was delivered on Feb. 28 by Jeannie Seely following Vincent’s Opry performance of “Like I Could,” a song that Seely co-wrote.

“How would you like to be the next member of the Grand Ole Opry,” Seely asked, to which Vincent replied after confirming with Seely twice that she was serious, “Absolutely, 100 percent yes.”

“I’ve been waiting for this all my life; thank you Lord, thank you dear God,” said an exuberant Vincent who sparkled in a gorgeous pink sequined and jeweled dress.

Vincent isn’t just immensely talented, she’s beautiful enough to be a cover girl, and in fact, she is. She’s been pictured on dozens of album covers not to mention numerous magazines, posters and billboards.

Having performed since she was only three years old, Vincent’s stage style has undergone decades of transitions. Whether blond, brunette or raven-haired, her sparking blue eyes and stylish attire have remained unquestionably engaging.

“Starting out in a musical family, we always dressed alike or matching in color and style,” she said of her family’s band, The Sally Mountain Show, which included Vincent, her parents and her brothers. “Dressing for stage has been something I’ve been doing all my life. For as long as I can remember, there were always stage clothes, then there were regular clothes.”

When the Missouri native first arrived in Nashville to record for Giant Records, she was provided with style professionals to help identify her “look.”

“I learned so much from that single experience,” she recalled. “They tried 100 shades of blush on my cheek to find the exact color that works for me. They did my ‘colors.’ They told me I was wearing the wrong clothing size. The stylist went shopping and found all the perfect clothes for my body and in a style that enhanced my figure in the best way possible. I carry all of those lessons into what I do today.”

Vincent acknowledged that throughout her career styles have changed to what she terms “the more disheveled look,” with torn jeans and fitted t-shirts. She sees traditional country and bluegrass music a “more of a classic music,” so she dresses in gowns and the men wear suits for performances.

“At every show, there are compliments thanking us for dressing up,” she said, recalling a time when she wore a more conservative dress on the Opry Country Classics show at the Ryman. “I thought it was a great dress, it just wasn’t sequined or sparkly. My husband complimented me on the dress, but a lady came to me after the show and said that I should have dressed up and shown more respect to the Opry/Ryman stage, and dressed like Loretta Lynn. So in that instance, it was the actual dress I chose that was the issue. I’ve learned you can’t please everyone all the time, but I always take great care in selecting what I wear.”

For stage, Vincent said it’s usually a sequined dress or gown, appropriate to the venue. If the performance is in a large arts center, she wears a long gown, creating a presence commensurate with the scale of the auditorium. For an outside festival, she wears a shorter gown, mostly for functionality, she explained.

“It’s difficult to sign autographs wearing a gown at an outdoor festival,” she said. “Also, when I find a pair of shoes I love, I buy two pairs – one that I can wear at festivals through the dust and dirt and not be afraid to ruin them. I just wear them, mud and all, and wipe them down later. I always keep a pair of rubber boots on board, in case it’s raining. I rotate the shoes, dresses and gowns from the bus, according to the season.”

Vincent said that a major change accompanying a higher level of success is that she now owns dresses by such designers as Constance McCardle, Jackie Rogers and Vera Wang.

“It’s fun to have something that is totally and uniquely my own,” said the 57-year-old. “With maturity comes a confidence to maybe wear something a bit more sophisticated that I might not have worn a few years ago.”

Like every woman, Vincent has one dress that stands out as a favorite. For her it is the green dress she wore on the cover of her “All American Bluegrass Girl” album. Stylist Jennifer Kemp, who Vincent calls “the greatest,” selected the green dress and some gold boots, and Vincent was seated on a green chair for the photo shoot. Vincent thought the shots would never be used and was stunned when the photographer sent her the photo chosen for the album cover.

“Still not convinced it should be the cover, I showed it to several people,” she said. “They all said the All American Bluegrass Girl can wear whatever color she wants. I loved the idea of it being so different –something I pride myself on, to always do something different – so it became the cover.”

Vincent said that the dress was discussed on radio shows and everywhere she went.

“I would have promoters wave my check before the show and say I wouldn’t get paid unless I wore the green dress,” she said. “The years 2006 and 2007, I wore that dress almost every show at the demand of either the promoter or the fans. I still have it, and it was once on display at the Tennessee Museum for the photographer’s feature.”

With the advent of social media and its instantaneous nature, Vincent has become increasingly conscious of when and where she wears her outfits.

“I wore the same shirt two weeks in a row off stage, and photos were online. When we were at a restaurant, someone asked if that was the only shirt I owned,” she said. “With social media now, I need MORE new clothes! Will you tell my husband that I NEED them?”

What Opry Membership Means for Vincent

Rhonda Vincent has been performing at the Grand Ole Opry for years, but until the evening of March 28, 2020, she was not an actual “member.”

The invitation to become a member is often completely unexpected by the artist, as it was for Vincent on the night of Feb. 28 when her invitation came from Jeanne Seely. To no one’s surprise, Vincent accepted the honor, and the March 28 induction ceremony was planned.

“Throughout her award-winning career, Rhonda has always made time to visit us at the Opry,” said Opry Vice President and Executive Producer Dan Rogers in a statement. “She is a force of nature on stage and a friend to fellow artists and fans alike behind the scenes.”

Throughout the Opry’s history, a very small percentage of the vast number of artists who have played on the Opry stage have actually been inducted as a member. For a list of current members, which includes 2020 inductees Vincent and Gene Watson, visit Opry.com.

Membership is an honor, but it carries responsibilities. Members may play at any show they wish, but they are required to perform at least 12 shows annually. Because the Opry has four segments per show, there is ample opportunity for members to act as hosts as well. As long as a member remains in good standing with the Opry, he or she will retain their membership until death.

“Rhonda’s songs have a home among the many styles of music we celebrate at the Opry for the rest of her career,” Rogers said.

In addition to performing at the Opry, Vincent has a rigorous tour schedule with shows in every region of the country. She appears at a number of bluegrass festivals and often has multi-night performances at such venues as Branson, Missouri’s, Silver Dollar City and at Dollywood in Pigeon Forge, Tennessee. Vincent has frequently been a guest performer on the CFR Cruise, and her jam sessions are among the most popular events of the star-studded cruises and has appeared on “Larry’s Country Diner” many times.

For schedules and additional information, visit Vincent’s website at rhondavincent.com.