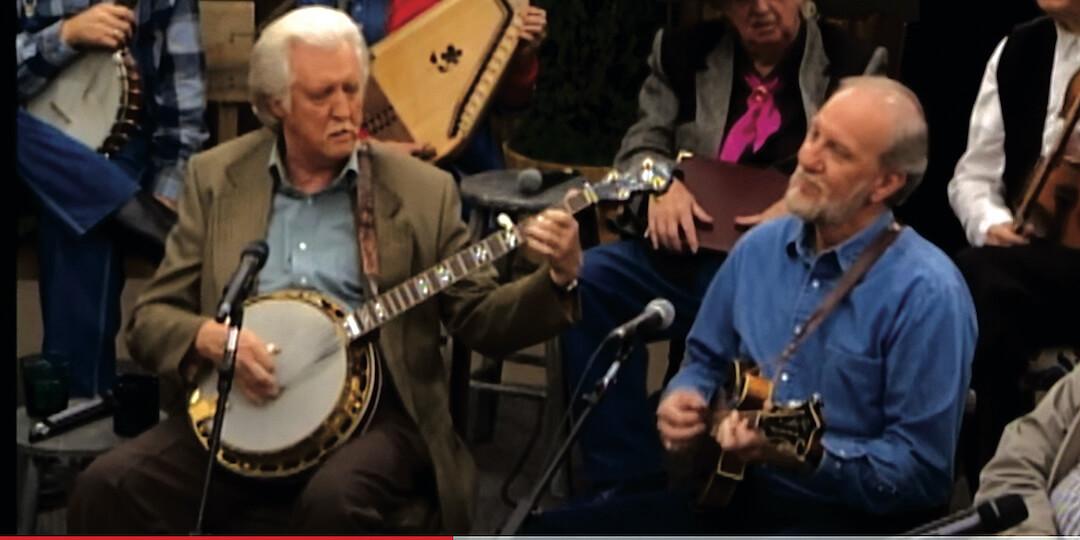 Banjo virtuoso James Dee “JD” Crowe passed away at age 84 on Christmas Eve 2021 at his home in Nicholasville, Kentucky. Initial reports indicated that Crowe’s cause of death was pneumonia. He is survived by his wife of 48 years, Sheryl, and their two children, David and Stacey, as well as one granddaughter.

According to the Bluegrass Hall of Fame, to which Crowe was inducted in 2003, Crowe had a musical conversion experience at the age of 12, on Sept. 17, 1949, when he first heard Lester Flatt, Earl Scruggs & the Foggy Mountain Boys play at WVLK’s Kentucky Mountain Barn Dance in Lexington, Kentucky. There are photos showing the youngster sitting in the aisle, his eyes intently fixed on Scruggs’ banjo. Purchasing the Foggy Mountain Boys’ 78-rpm records, he would slow them down in order to decode the complex patterns of Bluegrass banjo classics. The next year, Crowe won a radio appearance with radio singer Esco Hankins in a talent competition, which led to other stage and radio work in the local area.

His first big job was with Bluegrass and Country singer Mac Wiseman in 1955. Touring the country with Wiseman’s group and the companion band of pioneering Bluegrass banjo and guitar player Don Reno and Bluegrass guitarist Red Smiley, Crowe was able to spend hours jamming with some of the creators of the Bluegrass sound.

He also played with Bluegrass fiddler Curly Parker and with Pee Wee Lambert, a mandolinist who had worked with The Stanley Brothers.

Crowe was offered a job with Jimmy Martin’s Sunny Mountain Boys in 1956, and stayed with Martin four years.

“Jimmy’s timing was more outgoing,” Crowe once recalled in an interview. “He wanted all the backup instruments going real hard all the time to match his singing, so I had to simplify my style…. It was straighter playing and hard driving. Jimmy always stressed rhythm and timing, and playing what fit the song.”

Ten years later he evolved his group into J.D. Crowe and the New South and started adding Country and Folk elements drawn from the work of Gram Parsons and Gordon Lightfoot, respectively.

Crowe is credited for bringing together world-class musicians. The New South at times featured Ricky Skaggs on mandolin and tenor vocals, Jerry Douglas on dobro and Bobby Slone on bass and fiddle. Guitar master Tony Rice, who died on Dec. 25, 2020, was the lead vocalist and guitar

player for a group of progressive Bluegrass musicians. Keith Whitley joined in the late 1970s. Crowe admitted that his band may have been considered the outlaws of Bluegrass because it embraced changes and incorporated them into their repertoire.

“J. D. Crowe’s New South never lost their identity as Bluegrass musicians, nor their rapport with older fans, even though they roamed far and wide for material and pushed their instruments to limits generally not sought by other performers,” wrote music historian Bill C. Malone, author of Country Music U.S.A. “Superb musicians…moved in and out of the New South, but all of them learned something from the timing, precision and clarity exhibited by Crowe himself.”

Crowe’s influence went far beyond the artists who regularly played with the legendary musician. Both Alison Krauss and Bela Fleck acknowledge the impact he had on their careers.

Krauss grew up listening to the album “J.D. Crowe and the New South” and kept a framed copy of its cover on the wall in her home, according to a 2016 article in Bluegrass Situation by Bill Nowlin, whose Rounder label released the project.

“We lost one of the greatest banjo players ever to pick up the five early this morning,” Fleck Tweeted upon hearing of Crowe’s death. “Farewell and thank you JD Crowe.”

Over the years Crowe’s albums became slightly more Country-oriented, blending drums and electric instruments with the Bluegrass strings. He also began producing albums in Nashville and performing solo at times.

“I don’t want to continue doing what I did in 1970,” he said in an interview. “It’s like riding a dead horse…. That’s where progress comes from, how new groups evolve.”

Kentucky Educational Television in 2008 aired a biography called “James Dee Crowe, A Kentucky Treasure: The James Dee Crowe Story,” produced by H. Russell Farmer, which is available free online. It includes interviews with Crowe and a number of other musicians.

Crowe received the Bluegrass Star Award from the Bluegrass Heritage Foundation of Dallas, Texas, on Oct. 15, 2011. The award is bestowed upon Bluegrass artists who do an exemplary job of advancing traditional Bluegrass music and bringing it to new audiences while preserving its character and heritage.

Crowe battled chronic obstructive pulmonary disease (COPD), a condition that kept him from touring in recent years. His farewell tour came in 2012, but he continued to play at selected venues on a limited basis for several more years. He took part in a brief banjo jam session on the episode “Sawmill Slasher” of the Animal Planet television series “Call of the Wildman,” which aired Aug. 5, 2012. On Sept.6, 2014, Crowe came out of retirement and performed with Wildfire at the historic Lincoln Theatre in Marion, Virginia, for the “Song of the Mountains” PBS

program. He was featured on Tim Farmer’s television show, “Homemade Jam” in Episode 101.   On Sept. 21, 2015, Crowe was the featured guest on the radio series “An Intimate Evening with Eddie Stubbs” for WSM (AM) at the Country Music Hall of Fame and Museum in Nashville.

“I loved Bluegrass, I grew up on it,” the legendary musician, who was never afraid of change, told Rolling Stone in a 2020 interview. “But there’s other music and other things you can do.”

Musically fearless, his seven decades as a performer proved him right.