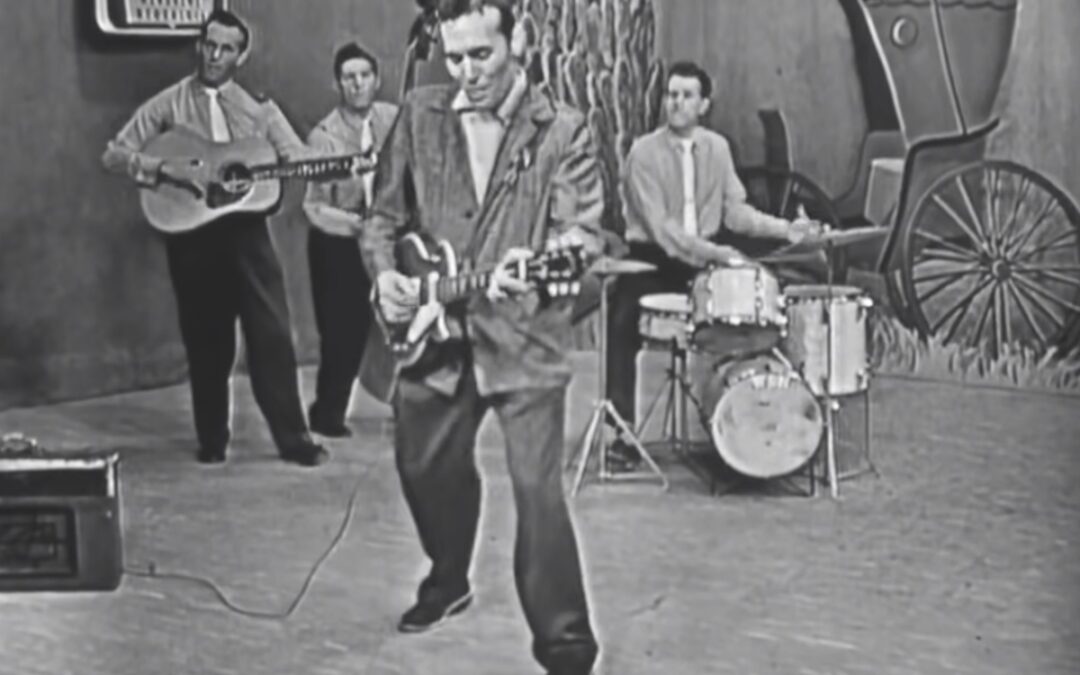 World-renowned guitarist and song- writer, Carl Perkins shook America by writing and performing the 1956 mega hit, “Blue Suede Shoes.” Known to the world as the “Father of Rockabilly,” Perkins helped influence a whole generation of audiences and musicians.

His beginnings included being put to work by his sharecropper father in his birthplace of Tiptonville, Tennessee. He learned how to sing Gospel music from fellow sharecroppers in the fields. Young Perkins’s guitar knowledge derived from an African American man named John Westbrook who was also a field hand. Thanks to radio influence on Saturday nights the Perkin residence was filled with sounds of the Grand Ole Opry. Perkin’s father loved Country music and that love wasn’t wasted on young Perkins. He was entertaining children and teachers at school by the time he was 10 years old and started performing live before other audiences when he became a teenager.

By 1947 Perkins had turned 14, and his family had made the decision to move closer to Madison County, Tennessee, placing the family closer to Memphis. At that time Memphis, Tennessee, had wonderful connections to an array of music.

The Cotton Boll Tavern was the first location that Perkins and his brother, Jay, got a gig performing. They earned the reputation as up-beat tempo County Music singers, and occasionally they were known as fighters in the different taverns that at first were their only performance venues.

The popularity of the song, “Let Me Take You to the Movie, Magg,” penned and recorded by a young Perkins, was the topping on the cake for Sun Records producer Sam Phillips in Memphis in deciding to sign the budding talent. Most people think that Elvis Presley brought the Rockabilly genre of music to the American stage, but Phillips had caught it long before Presley when he signed Perkins as a performer and a songwriter.

In the fall of 1955 Perkins wrote “Blue Suede Shoes” after friend and fellow musician Johnny Cash told him the story of his army buddy whose favorite possession was a pair of blue suede shoes. Some say that Perkins wrote the song after witnessing someone getting upset about their shoes being scuffed up. Regardless of the inspiration, the song is legendary.

The song was finally released as a Country single and was also performed by Perkins on the first day of 1956. Presley gained fame by recording it soon after it was written. It was the postwar era for Americans, and soon there were plenty of listening “Blue Suede Shoes” patrons.

It reached No. 1 on Billboard Magazine’s Country chart and No. 2 on Billboard’s Best Seller Popular Music Chart. The rockabilly jam even became the first Country music song to place at No. 3 on the Rhythm and Blues chart. The Perkins version of “Blue Suede Shoes” went gold and sold more than 500,000 copies.

Television craved the song and the writer who performed it so well. ABC’s Ozark Jubilee requested and received a live performance by Perkins. CBS allowed Presley to perform the song. Perkins and Elvis duked it out during this period when a new American musical genre was impacting music domestically and abroad. The song gained multi-national fame by becoming a hit in Great Brittan.

Perkins was headed to New York City for an appearance on the popular “Perry Como Show,” when the car he was in became part of a fatal accident that landed him face first in water. He had sustained three fractured vertebrae in his neck, a severe concussion, a broken collarbone and lacerations all over his body, remaining unconscious for an entire day.

The driver of the truck in the accident, Thomas Phillips, was killed. Perkins’ brother, Jay Perkins, sustained severe internal injuries and passed away in 1958 from ongoing complications due to the accident.

Presley sent his competitor a note wishing him a safe return to music. Presley went on to record other songs and even aided Perkins during his recovery by performing “Blue Suede Shoes” on “The Steve Allen Show” and “The Milton Berle Show.”

In late 1956 Perkins returned to music. He recorded several songs such as, “Dixie Fried” and “Everybody’s Trying To Be My Baby.” Perkins appeared on television shows, including “The Johnny Cash Show,” in the late 1960s.

In addition to his hit, “Blue Suede Shoes,” he went on to write numerous songs that continue to be recorded by artists of various genres. “Silver and Gold” is one of the better-known songs he wrote. Dolly Parton recorded it for a top-20 hit in 1991 on her album “Eagle When She Flies.”

He even co-wrote songs with the likes of Bob Dylan, Johnny Cash and the Judds. In 1981 he recorded a song called “Get It” with Paul McCartney. Perkins performed with Joan Jett, Chet Atkins and many other influential artists during his long career.

In 1985 Perkins was inducted into the Nashville Writers Hall of Fame, and in 1987 he was welcomed into the Rock and Roll Hall of Fame. A dozen years later he lost a battle with cancer.

As a testament to Perkins influence on Country, Pop and Rockabilly music, “Blue Suede Shoes” was entered into the Grammy Hall of Fame Award and made the list of “500 Songs That Shaped Rock and Roll.”