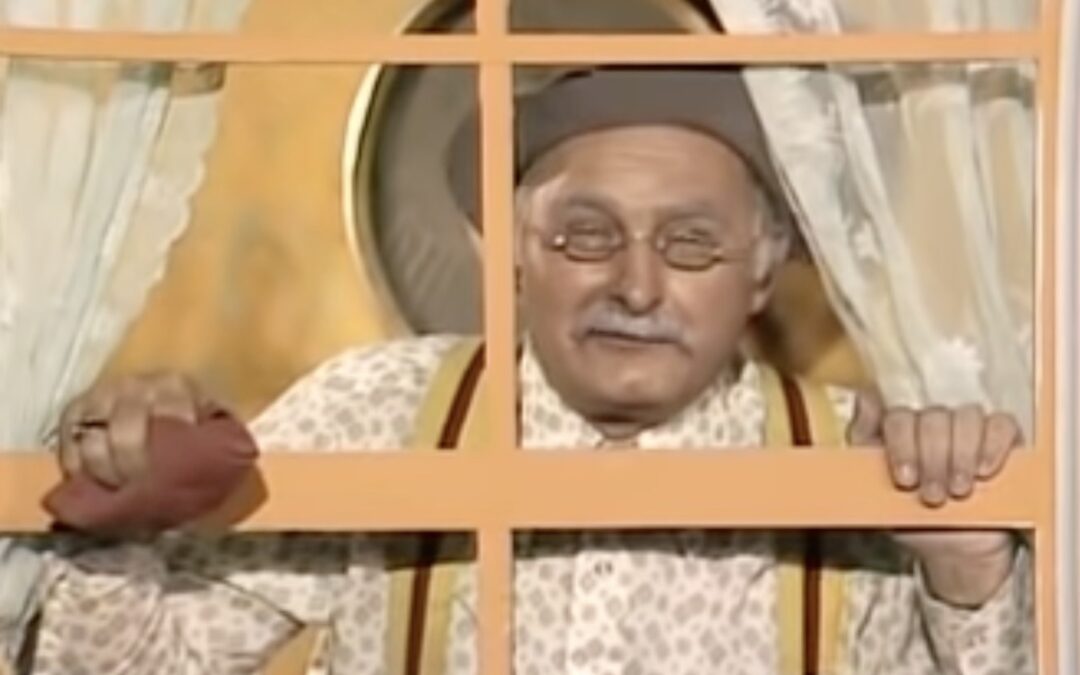 Known as “Grandpa Jones” to most of the world and remembered for his comedic role on the successful and long-running Hee Haw television series, Louis Marshall Jones was far more than a Country comedian and musician. Television was in its embryonic stage when in 1931 Jones launched his professional career by joining the Pine Ridge String Band that provided musical accompaniment for the popular Lum & Abner nationally syndicated radio show.

By the time “Hee Haw” made the airways in 1969, Jones was 56 years old and had 38 years of entertainment experience behind him. He’d had been a member and regular performer of the Grand Old Opry for 23 years by the time the comedy TV series launched. His career encompassed all 25 years of “Hee Haw” and continued until his 1998 death, with his only professional break being during his WWII military service.

Comedy was ever present with Jones but equaled only by the seriousness of his professionalism.

“When on stage, he owned it,” said wife Ramona in an interview with the Tennessean newspaper, adding, “He didn’t want any confusion, whispering or talking in the background.”

His sense of humor included not only the novelty songs for that he became known for but also for the jokes, poems and stories he loved to tell.  Humor was a component of his stage acts but presenting a great musical delivery brought his greatest sense of satisfaction.

The persona and stage name of Grandpa Jones is credited to musician/songwriter Bradley Kincaid, who in 1935 gave Jones the nickname “Grandpa.” Legend recounts it came about as a result of listeners writing into the radio station wishing to know the name of the singer with the “old voice.” It was Kincaid who was to have responded with the name “Grandpa Jones.” Kincaid, however, recalled the name was given to Jones, then 22, because of his off-stage grumpiness at early-morning radio shows. Whichever the case, Jones liked the name and kept it for the remainder of his career.

Jones learned to play both the guitar and banjo. Yodeling was incorporated into his songs and performances and is likely attributed to Jones’ admiration of Jimmie Rodgers whom he idolized. Jones soon learned the entertainment business was highly competitive and that being an entertainer required more than being a performer. He honed the character of Grandpa Jones to include foot stomping and leg kicks while always wearing his pants tucked inside his boots. His approach incorporated a two-pronged approach in winning over his audiences. Just the looks of Grandpa Jones, dressed in his flat round hat, spectacles, white hair and mustache endeared one to this grandfather looking figure. To put the seal on the deal, however, Grandpa delivered with his wit, professionalism and his musical and comedic talents.

In 1937, Jones had worked his way to West Virginia where he met entertainer Cousin Emmy (Cynthia May Carver) who taught Jones the clawhammer style of banjo playing. This style fit more readily with the concept of Grandpa Jones as it presented a “rough backwoods flavor” to his performances. Jones preferred the simpler, old time country and gospel songs. In November 1938, Jones married Eulalia Marie Lasher and they became the parents of one child, Marsha Marie born in December 1939. The marriage ended in divorce in 1942.

Jones recorded his first hit song, “It’s Raining Here This Morning,” in 1944 for King Records. Putting his entertainer career on hold, Jones enlisted in the U.S. Army during World War II and resumed it again in 1946 after his discharge from service. During his career, Jones would record on labels for King Records, RCA, Decca and Monument.

1946 was to have been a pivotal year for Jones with having moved to Nashville, Tennessee in March where he started performing on stage at the Grand Ole Opry. On October 14 of that year he married Ramona Riggins who was also an accomplished performer in her own right.  Jones had met Ramona while both worked for WLW Radio in Cincinnati, Ohio. Ramona would perform on stage with Jones for more than 50 years. They became the parents of three children, Mark, Eloise, and Alisa.

Grandpa Jones became a household name in 1969 when he became one of the original cast members of the greatly successful television show “Hee Haw.” Featured by himself or with his wife, Ramona, or fellow banjo picker and friend, David “Stringbean” Akeman, Jones enjoyed bringing his brand of entertainment into the homes of millions of Americans. One of his favorite skits involved Buck Owens, Roy Clark, Kenny Price and Jones singing together in the Hee Haw Gospel Quartet. Jones was a serious fan of southern gospel music.

Jones recorded many songs during his career, but he is best remembered for “T For Texas,” “Are You From Dixie,” “Night Train To Memphis,” “Mountain Dew” and “Eight More Miles To Louisville”

The Country Music Hall of Fame commemorated Grandpa Jones for his “exuberant banjo playing,” “infectious verbal comedy” and “one of country music’s most dedicated champions of old-time music.”

“Jones not only helped keep banjo playing alive during times when it had fallen into disfavor with most professional musicians, but he also helped to keep alive the songs of pioneers like Jimmie Rodgers, Bradley Kincaid, Lulu Belle & Scotty and the Delmore Brothers,” the Hall of Fame website observed.

Jones published his autobiography in 1984 and chose for its title, Everybody’s Grandpa: Fifty Years Behind The Mike. Jones worked continuously for another 14 years on the Grand Ole Opry. In January 1998, after having giving two show performances at the Opry, Jones suffered two strokes. He passed away on Feb. 19, 1998 in Hermitage, Tennessee at the age of 84.

Grandpa Jones worked diligently throughout his career to bring humor and old-time country music to his fans and audiences. He entertained the world for more than six decades. He will forever be remembered as “Everybody’s Grandpa.”