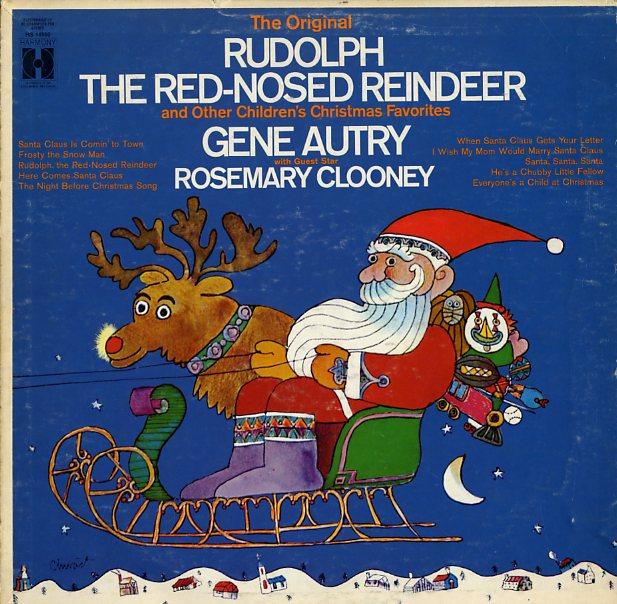 You know Dasher and Dancer and Prancer and Vixen or Comet and Cupid or Donner or Blitzen? But, do you recall the most famous reindeer of all? That’s right. It’s Rudolph the Red-Nosed Reindeer. He may be climbing in years, but at 83 he remains the best-known reindeer in the world, and it’s all because of one of country’s most popular singers, Gene Autry.

The song that tells poor Rudolph’s story was originally a poem by Robert L. May written in 1939 as a work project for Montgomery-Ward when the department store and mail order company decided that creating its own holiday booklet to give to children would be more cost effective than handing out coloring books bought elsewhere. When the store ceased using the booklet, May, who held rights to the poem, fashioned it into an illustrated children’s book.

He also allowed his brother-in-law Johnny Marks, who wrote many of the Christmas songs still popular today, to convert the poem into a song called “Rudolph the Red-Nosed Reindeer.” The composition was sent to and turned down by artists like Perry Como, Dinah Shore and Bing Crosby, who didn’t appreciate the song’s story line. Love for the song didn’t grow overnight, but there was a Singing Cowboy that would change all that.

Autry and his sidekick horse, Champion, were known for unforgettable Western movies in the 1930s and ‘40s that garnered them legions of devoted fans. When Autry was approached to sing “Rudolph the Red-Nosed Reindeer,” like many other artists, he didn’t care for the tune. However, his wife, Ina, fell in love with the “ugly duckling” appeal of Rudolph’s shiny nose that made Santa choose him while other reindeer had shunned him. Ina encouraged her husband to record the song, and on Sept. 1, 1949, Columbia Records released Gene Autry sings Rudolph the Red-Nosed Reindeer. The album also included “Here Comes Santa Claus” written by Autry, who was inspired while riding his horse in the Santa Claus Lane Parade (The Hollywood Christmas Parade) in Los Angeles, Calif., when he heard children shouting, “Here comes Santa Claus.”

The Gene Autry sings Rudolph the Red-Nosed Reindeer album sold 1.75 million copies in the Christmas season of 1949 alone. The first time fans ever heard Autry sing the song was on Oct. 8, 1949, on his CBS radio program, Melody Ranch. Autry had previously taken a break in 1942 from his film and music career to enlist in the U.S. Army, where he served as a pilot until 1945. Rudolph the Red-Nosed Reindeer reintroduced Autry to the music charts as it steadily stood No. 1 the entire first week of 1950. Rapidly gaining admiration, the album would go on to sell 12.5 million copies.

Rudolph the Red-Nosed Reindeer made another important debut on Dec. 6, 1964, during an NBC Christmas special called the General Electric Fantasy Hour. The program was produced in stop motion animation, which gives the illusion of object movement by moving the object a little during a series of photographed frames. The technique allowed viewers to be entertained by the song’s story of Rudolph the Red-Nosed Reindeer through illustrations and the interacting of characters.

Two of the other very popular Christmas classics performed in the special by Burl Ives, “Holly, Jolly Christmas’ and “Silver and Gold,” were written by Johnny Marks, the same man who had turned the Rudolph poem into a song decades earlier. The special ran only once a year on NBC until 1972. Since that time, only CBS continues to provide a very limited broadcast schedule of the Rudolph the Red-Nosed Reindeer Christmas special.

Had a beloved country star like Gene Autry not taken a chance on this quirky Christmas tune, generations of children may have missed the joy of one of the holiday season’s most beloved characters.

Second only to Bing Crosby’s “White Christmas,” “Rudolph the Red-Nosed Reindeer” remains one of the top-selling Christmas singles of all time with estimated sales, including cover versions, at 200 million copies. For decades renowned artists of all genres have recorded the song for their own Christmas albums. A few country favorites such as Dolly Parton, Merle Haggard and Alan Jackson have added their personal touches to the holiday mantra as well.

However, The Singing Cowboy certainly made the most famous version of all. Autry is legendary, and part of his legend is “Rudolph the Red-Nosed Reindeer.”