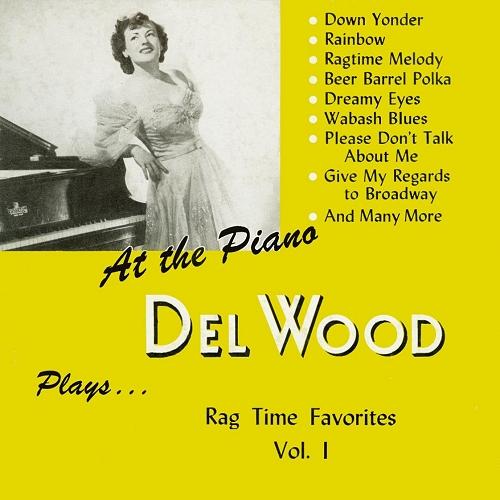 Influenced by what she heard on the radio as a child during the post-World War I era, Del Wood grew to love ragtime music and honky tonk music. However, it was Country music that made the accomplished pianist unforgettable.

Though her parents originally tried to persuade Wood to perform Classical music when she showed talent on the piano as a preschooler, during her thirties Wood admitted that performing on the Grand Ole Opry stage was her real dream.

“The classics are such that you are playing someone else’s material and you must play them perfectly,” she stated in a 1984 interview. “In ragtime, you can give it your own interpretation. To me, ragtime and country music are the only true American music forms we have. Ragtime has so much get-up-and-to that it’s infectious; it’s part of our heritage.”

Once while Wood was playing with numerous musicians in a vacant studio located above a grocery store, the police showed up during a particularly lively jam session believing they had identified an operating brothel. They quickly realized they had stumbled upon a handful of great musicians and a few instruments that created so much music that it filled the room.

Born Polly Adelaide Hendricks on Feb. 22, 1920, the pianist married Carson Eugene Hazelwood. In 1941 she shortened her first name and her married name to become “Del Wood.”

Wood’s first “music” job was selling sheet music as a demonstrator in a record shop, where she played the latest hits and popular classics on the piano. It was there she developed her style, which she later learned was a combination of ragtime and Dixieland.

Wood became a staff pianist for WLBY in Bowling Green, Kentucky. The job led to her work with a group called Hugh “Baby” Jarret and his Dixieliners after they heard Wood play “Down Yonder.”

“When I learned that my chances of having a child were slim, I felt I had to do something more with my life than just keep house, “ she said in an interview.

She found more secure employment as a clerk for the Tennessee Department of Health, but she continued practicing piano and trying to break into the music business for 10 long years.

Out of the blue an executive who was launching a record company remembered her from working at the music shop and hired her to become a professional pianist.

She began recording sessions with the Tennessee Records label in 1951. “Down Yonder” was Wood’s most successful hit, causing her to become the first solo instrumentalist to sell a million copies of a record. Wood was awarded with a gold disc and the national hit made the Billboard chart for Pop and Country music.

The success led to Wood’s performing on the Grand Ole Opry. By 1953 Wood was a full-time performer on the Opry.

While recording with RCA Victor Records for eight years in the 1950s, Wood was able to express her love for music through Honky Tonk and Country stereo recordings, resulting in six big-selling LPs along with her mega-hit, “Down Yonder.”

In a 1988 interview Wood revealed that she had hated her health department job, saying that “Down Yonder” had liberated her “from the typewriter keys to the 88s.”

In the early 1960s she signed with Mercury Records and released “Ragtime Goes South of the Border.”

In 1988 Wood celebrated her 35th anniversary as a star of the Opry and still held the record as the only million-selling female instrumentalist in Pop music history. Along with Kitty Wells and Lorrie Morgan, she was at that time one of only three native Nashvillians to have been Opry cast members.

“I remember my first guest spot on the Opry because it was the day after my birthday in February 1952,” Wood said. “I couldn’t believe it when they started calling me back each week. All of a sudden I became a regular.”

Wood performed in Viet Nam, South Korea, Australia and the Philippines, but she was glad she stayed with the Opry and her hometown. In an interview she recalled having turned down a two-week stint at the Fontainebleau Hotel in Miami making $2,500 per week.

“I have never regretted my choice,” she told the reporter. “I’d rather eat for a long time than eat high off the hog for just a little while. Country fans are so loyal. You don’t find that in any other field of music.”

Although none of her other hits had the same fame as “Down Yonder,” Wood recorded and sold many records during her lengthy music career. In 1968 Wood toured with the Grand Ole Opry package tours during the Vietnam war. Wood consistently performed on The Grand Ole Opry stage until shortly before her death from a stroke on Oct. 3, 1989, at age 69. She was no longer married at that time and was survived by her son, Wesley Carson Hazelwood.

Her tombstone at Mt. Olivet Cemetery in Nashville has a piano keyboard with the words “Queen of the Ivories.”