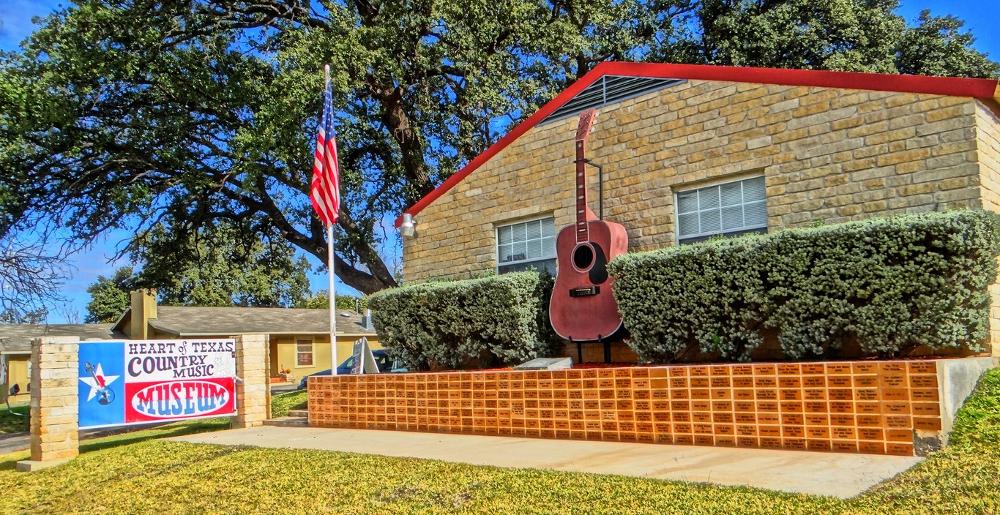 More than 100 Country artists are represented in the Heart of Texas Country Music Museum  in Brady, Texas, where stage costumes, musical instruments, autographs, posters and other memorabilia highlight Country Music’s colorful past.

Brady businessman Billy Jackson donated a lot on South Bridge Street in Brady in memory of his wife, Peggy. Donations poured in and soon construction began. Kitty Wells and Johnny Wright broke ground on the museum.

The museum contains hundreds of authentic pieces of Country music memorabilia. About 80 percent of the collection was donated by the artists themselves or the artists’ family.

Of special interest are costumes designed by some of the greatest tailors in the business including Nudie, Harvey Krantz and Nathan Turk among others. In fact, the idea for the Heart of Texas Country Music Museum began with a Rose Maddox gold and rhinestone dress made by Nathan Turk.

“This dress was worn by Rose Maddox in the 1950s and was designed by Nathan Turk Rodeo Tailor,” Maddox stated in the letter with the dress, adding, “It is the last one that I have.”
Among the other costumes on display are Ray Price’s Nudie-designed suit with rhinestone feather designs; Lefty Frizzell’s Nudie Musical Note Suit used on the “Lefty Frizzell Greatest Hits” album; Ernie Ashworth’s “Lip Suit” honoring his biggest hit “Talk Back Trembling Lips;” custom black, white, yellow and red boots and a white cowboy hat from Carl Smith; George Jones’ Nudie suit; and Hank Williams Jr.’s Nudie-designed musical shirt along with his custom made monogrammed boots

Some of the other items are:

Texas native Jim Reeves is honored in a display containing two of his suits, a record award, a Grammy nomination plaque., a suit and his Baby Martin guitar. The museum acquired Reeves’ 1956 Flxible Touring Bus, “Big Blue,” which has been refurbished, is now parked beside the museum and open for tours. After Reeves’ death, “Big Blue” was used by Wilma Burgess and The Wilburn Brothers.

The “Coal Miner’s Daughter” Loretta Lynn has donated several items to the museum, including stage dresses, shoes and even jewelry.

For more information and to confirm hours of operation or schedule group or special tours  visit www.hillbillyhits.com, call (325) 597-1895 or email tracy@hillbillyhits.com.