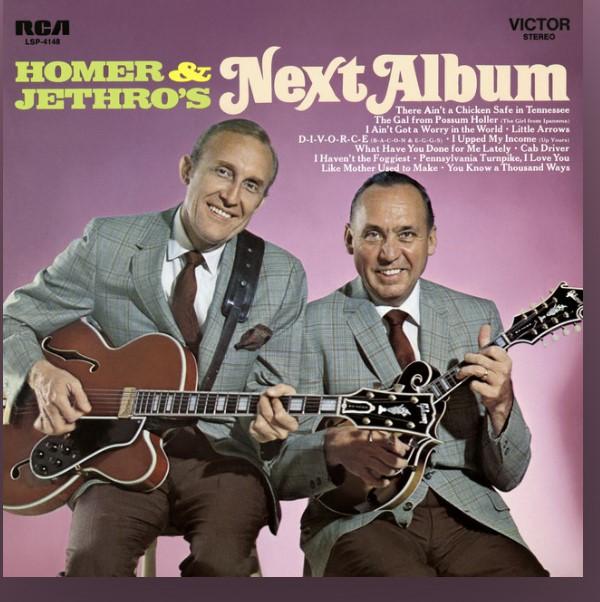 There’s little that can be written about Homer and Jethro that hasn’t already been said. Therefore, this story is most appropriately called “Lives Well Writ” as it contained observations and remembrances about two talented musicians who lived and practiced their craft far ahead of their time. They entertained and kept their audience laughing across four decades.

Homer and Jethro were the stage names of American country music duo Henry D. “Homer” Haynes (1920–1971) and Kenneth C. “Jethro” Burns (1920–1989). Most sources agree the two were first paired in 1936 when WNOX-AM program director Lowell Blanchard pulled the youngsters from two separate bands auditioning for his Mid-Day Merry-Go-Round on WNOX-Knoxville. Destiny would then place the boys together in Blanchard’s newly created band, the StringDusters. Here they performed with the stage names “Junior” and “Dude” until one night in 1936 when Blanchard literally forgot their nicknames while introducing them on air and referred to them as “Homer and Jethro.” Haynes and Burns apparently liked the new names and opted to keep and continue with them for the rest of their careers.

Haynes was an accomplished guitarist, while Burns was a much-lauded mandolinist. They salted their musical performances with satire and fun, letting their pure musical talents speak for the quality of their craft. Their popularity carried them from Knoxville, Tennessee, to Renfro Valley, Kentucky, where in 1939 they became regulars on the Renfro Valley Barn Dance. Next they traveled to Chicago where they would broadcast on the Plantation House Party radio program hosted by Whitey Ford as the “Duke of Paducah.” The outbreak of WWII pulled the performers apart when each was drafted into the U.S. Army with Burns serving in Europe while Haynes served in the Pacific. Following the war, Burns and Haynes reunited in 1945 and continued their careers in Knoxville and by 1947 had moved to Cincinnati, Ohio, where they played on the WLW radio station’s Midwestern Hayride. They recorded singles on King Records and worked as session musicians backing other artists for two years before signing with RCA Records. During a management turmoil episode at WLW in 1948, the pair left and toured for a while before moving to Springfield, Missouri, where they performed on KWTO-AM with Chet Atkins, the Carter Family and Slim Wilson.

Known as the “Thinking Man’s Hillbillies,” Burns and Haynes enjoyed creating music that poked fun at the popular songs of the day. They would sing exaggerated hillbilly-styled versions of pop standards in which their audiences found great delight. Their voices and music were honed to perfection, and they could flawlessly replicate the sound of the idolized artists of their day. Burns, who was the humorist of the pair, wrote most of the parodies they performed. Their first hit became a parody of “Baby It’s Cold Outside,” which they recorded with June Carter in 1949. They were soon invited to perform on the National Barn Dance on WLS-AM in Chicago in 1950. Burns and Haynes also performed on several recordings by Chet Atkins and on other artists’ sessions in Chicago and Nashville. It was while performing on WLS that Burns met and married Lois Johnson, twin sister of Leona Johnson, Chet Atkins’ wife. Atkins would become the production genius for most of the music the duo recorded during their career together.

Burns and Haynes took their music seriously but much enjoyed their time walking on the lighter side. Although lending their voices and instruments to poke fun at contemporary pop and country hits, they would inject their own variety of humor into their performances. Always using themselves as the brunt of a joke, Burns and Haynes kept their audiences laughing while tuning up for the next song.

From 1949 until 1959, Burns and Haynes toured and recorded, releasing singles entitled “Baby It’s Cold Outside,” “Tennessee Border – No. 2,” “(How Much Is) That Hound Dog in the Window,” “Hernando’s Hideaway,” “Sifting, Whimpering Sands”/”They Laid Him in the Ground” and “The Battle of Kookamonga.”

They won a Grammy for Best Country Comedy Performance in 1959 for “The Battle of Kookamonga,” a parody of Johnny Horton‘s popular “Battle of New Orleans.” In 1960 they released the single, “Please Help Me, I’m Falling” and in 1964 the Beatle parodies of “I Want to Hold Your Hand” and “She Loves You.”

Such popularity brought opportunities to appear on national network television and appearances with other famous country stars of the day. In 1960 they appeared with Johnny Cash on NBC. The duo was hired by Kellogg’s Corn Flakes to appear as commercial personalities promoting their product. The Kellogg’s gig was highly successful, bringing them into homes and giving them far more exposure than their country music performances could provide. It was also during the 1960s that a country humor revival exploded in television with shows like “The Beverly Hillbillies,” “Petticoat Junction” and “Green Acres.” Riding on the wave of these commercial successes, Homer and Jethro stepped up their recording efforts, releasing eight albums of new material on RCA Victor between 1966 and 1967.

As Homer and Jethro they performed and created albums for three and a half decades before the famous duo was separated by the death of Haynes from a sudden heart attack on Aug. 7, 1971. After a short semi-retirement by Burns, he was lured back into show business by folk singer Steve Goodman, who promoted him on tours for his excellent mandolin talents.  Burns died Feb. 4, 1989, in Evanston, Illinois.

Haynes and Burns were inducted into the Country Music Hall of Fame in 2001.

Life itself is portrayed by the world of Country Music entertainment. From the depths of sorrow to the heights of jubilation, performances reach our hearts and spirit. This story is part of the Lighter Side of Country series of stories published in our magazines that takes a look at the lighter side of life and features those artists, both past and present, who bring smiles to our faces and warmth to our hearts. It highlights those performers who exemplify the great comedic spirit of America.