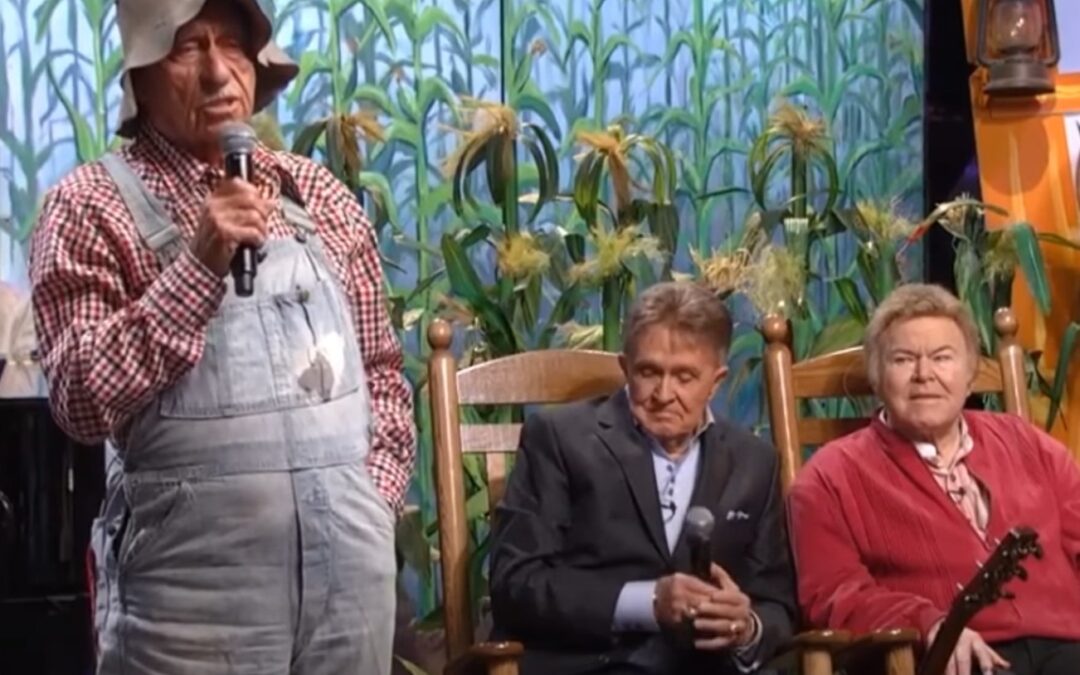 Hee Haw’s Gordie Tapp, died on Dec. 18, 2016, at age 94. A multi-talented musician, writer and comedian, Tapp was mourned in his native Canada as well as by American audiences who had been entertained by his memorable Hee Haw characters like Cousin Clem, Samuel B. Sternwheeler, Mr. Gordon the storekeeper and Lavern Nagger.

When he died in Burlington, Ontario, following a lengthy illness, he had been married to his wife, Helen, for 73 years. Daring and fearless, Tapp had given up rollerblading at 83 and stopped riding his Harley and his horses when he turned 85.

Tapp was born in 1922 in London, Ontario, and told an interviewer that he got the comedy bug as a young man when visiting his dying 93-year-old uncle, explaining that the elderly man was in great spirits telling jokes and making people laugh.

During World War II he was Master of Ceremonies for the Canadian Army Show, playing every base in Nova Scotia, New Brunswick and PEI.

After studying at the Lorne Greene Academy of Radio Arts, he founded and hosted a 1950s Canadian radio show called Main Street Jamboree where he created a character he called Gaylord.

At a 2012 press conference he recalled that he preferred jazz over the country music format of the show and considered leaving.

“But they offered me $35 dollars more each week to stay, so I did,” he laughed. “That was a lot of money in those days.”

He later emceed the CBC television show Country Hoedown between 1956 and 1965, where he conceived of the Cousin Clem character he brought to “Hee Haw.” He was host of The Performers, a series of shows featuring up and coming young Canadian talent, which was recorded in major Canadian cities like Montreal, Toronto, Winnipeg and Vancouver. His Canadian show, “What’s On Tapp,” entertained audiences for five years.

His first American television appearances were on the Perry Como and Jonathan Winters shows. He served as writer for 78 of the 90 “Hee Haw” episodes in which he appeared. Tapp’s other acting credits included the 1983 indie movie Sweet Country Music, which he also wrote, and Wild Horse Hank, a 1979 film by director Eric Till that co-starred Linda Blair and Richard Crenna.

Tapp made 27 world tours during his career, and continued to perform into his 90s.

“Seeing the reaction of the audience and how much they enjoy it all is what keeps me going,” he told an interviewer in 2012.

He cited three events from his life that were most remarkable to him. In 1967 he played in India and had tea with Indira Gandhi. On a US tour he had dinner with President Gerald Ford in Louisville, Kentucky. He also appeared before Prince Phillip in London for a Command Performance.

His 1980 album, ‘Both Sides’, featured both his comedic and singing talents. Tapp received the Order of Canada in 1998 and the Order of Ontario in 1999.  He is a member of the Canadian Country Music Hall of Fame.

“If laughter is the best medicine, Gordie Tapp cured more country music enthusiasts than anyone else in the history of Canada,” said the Canadian Country Music Hall of Fame, adding, “While Gordie Tapp’s gift of laughter is uniquely country, his gentle sense of humor is known as being uniquely Canadian.”