Jimmy Fortune’s Career Made by Serendipity and Talent 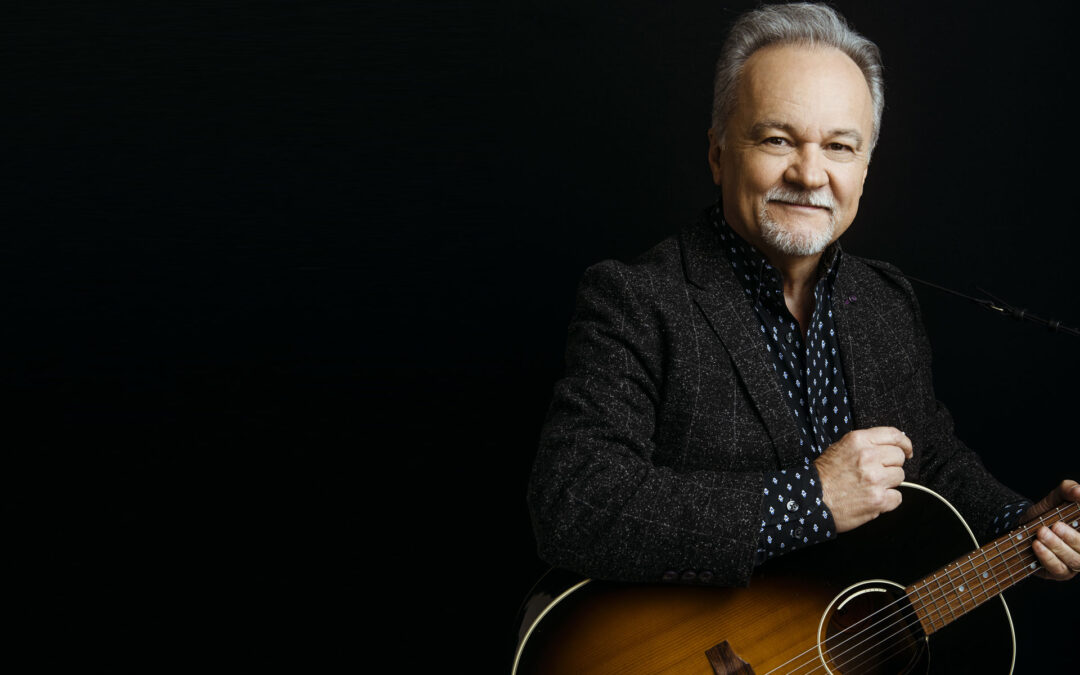 A combination of serendipity and talent best explains how country music’s beloved tenor, Jimmy Fortune, wound up with the Statler Brothers. Fortune was handpicked by the group’s original tenor, Lew DeWitt, as a temporary replacement for himself while he fought a debilitating medical condition. In 1982 when DeWitt opted not to rejoin the group, Fortune became a permanent “brother,” joining lead singer Don Reid and his real-life brother, bass singer Harold Reid, along with the group’s baritone Phil Barsley.

That turn of fortune, so to speak, resulted in a 21-year stint with the Statler Brothers, but an early case of mistaken identity remains one of Fortune’s comic memories. The group had arrived at a venue, and “the Brothers,” as Fortune refers to his band mates, had gone ahead to conduct sound check while Fortune retrieved his guitar from the bus. When he approached the guard for entry, he was stopped.

“I am,” Fortune argued and continued to try to convince the guard. “You’ll find out.”

Not budging, the guard made Fortune wait until help arrived.

“The road manager really crawled all over that guard,” Fortune laughed. “I said, ‘I told you,’ but I guess he was just doing his job.”

Fortune said that the Statlers’ hit “Elizabeth” was rumored at the time of its release to have been penned about Elizabeth Taylor, but he did not write the song specifically for the actress. He does believe, however, that Divine intervention inspired him to write it. Not only did he begin the song while watching Taylor’s movie “Giant” on the tour bus headed for Tulsa, Okla., but as the Statlers performed there, a young woman grabbed Fortune’s hand, yelling repeatedly, “I’m Elizabeth.” When he finally pulled away, he lost his balance and fell into the drums.

“I told myself that I’d better put that name in a song,” he said, adding, “It became my first number one song and one of the biggest songs I’ve ever had anything to do with.”

Fortune treasures the memory of the Statlers singing to Elizabeth Taylor on her 52nd birthday while she was shooting “Poker Annie” in Old Tucson, Ariz., and the Brothers were performing there.

“She came to our bus, and first we sang “Happy Birthday,” Fortune said. “When we finished, Harold stepped up and said, ‘We wrote “Elizabeth” just for you.’ So we sang it, and I guess she thought it was written just for her.”

Fortune said that as the tour bus traveled the long roads between concert sites, Don Reid would often start craving candy, announcing, “I’d give $100 for a Three Musketeers,” which no one had readily available.

“I took off to the back of the bus, and I was digging in my candy bar bag,” Fortune said. “I had the candy bars torn out, laying everywhere. I knew I had a Three Musketeers, but I couldn’t find it.”

The he heard it – the laughter. Unfortunately, Fortune confided his plan to Barsley, and Fortune’s brilliant candy joke was on him.

The Statler Brothers’ hit “Count on Me” was used as the theme song of the DARE (Drug Abuse Resistance Education) program initiated by the Reagan administration to combat youth drug use. The first time they met with President Ronald Reagan, they were seated in the Oval Office, when the president leaned back and propped his boots upon his desk.

“Well,” Reagan said, “I wore my cowboy boots in honor of you boys.”

The DARE program enabled Fortune to see many of the people he had admired, including one childhood hero, Gene Autry. When the Statlers were invited to Autry’s home, Fortune noticed Autry’s old Martin D45 guitar.

“Yes sir,” Fortune told him. “That’s the guitar I’ve seen you play on some of your movies and TV shows.”

“Do you want to play it?” Autry asked.

Fortune said he could hardly answer, but he said yes and played the cowboy legend’s guitar.

“I was sitting there between Gene Autry and Pat Buttram, and all I could think was that I wish I could call my dad,” Fortune said. “Of course, we didn’t have cell phones back then. I could not believe I was there.”

Fortune remembers his time with the Statler Brothers as a “blessing” that gave him the chance to use the musical gifts God gave him.