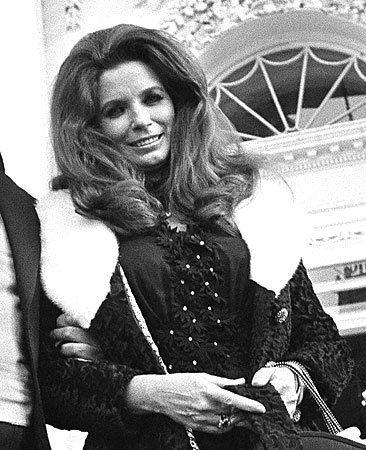 For more than six decades June Carter Cash occupied a place in American music culture so large it overshadowed her impeccable fashion sense exhibited both onstage and in her personal life.

June was born June 23, 1929, and at age 10 began playing autoharp and doing comedy bits on the Carter Family’s radio broadcasts. A Carter Family promotional photo from that time shows June wearing a plaid wool jumper, a satin blouse with full sleeves and a Peter Pan collar accented with a fluffy satin bow that matches the one in her side-parted hair. She holds her autoharp in her lap, and her legs are crossed daintily at the ankles.

In photos from a few years later when her sisters, Helen and Anita, and their mother, Maybelle Carter, began performing as Mother Maybelle and The Carter Sisters, June is often “cutting up,” while the others hold their instruments seriously. They are usually dressed in matching or coordinating costumes. Some are casual floral dresses with tiered shirts and peasant bodices. Others are shirt-waist dresses in bold patterns with full skirts, button-up bodices and self belts that accent the women’s shapely figures. The foursome became part of the Grand Ole Opry in 1950, but June soon attracted separate attention.

Some particularly beautiful color images of June taken in the 1950s when she was in her 20s stand out. In one she wears a red-orange and tan paisley shirt, quite fitted to her body, sleeves buttoned to the elbows, exposing thin, pale arms holding lush auburn hair atop her head as she stands in the shadows of a sun-filtered barn. There’s a photo most likely made the same day but not so dramatically posed in which she looks directly at the camera, her blue eyes gleaming, wavy hair clasped at the neck and lips tinted a red-orange the exact shade of the paisley shirt. In a separate shoot, June was photographed in various poses at a vintage log structure for Life magazine dressed in a casual striped shirt, wide leather belt and denim jeans rolled to just below the knee.

Another day June is caught in a candid shot as she looks pensively toward the floor. Subtle makeup highlights high cheekbones, and red lipstick contrasts straight, white teeth. Her hair just grazes the line of the boat-neck, white polka dot cap-sleeve, fitted dress

It was in ‘50s that director Elia Kazan saw her perform at the Grand Ole Opry and encouraged her to study acting, which she did in New York at the renowned Lee Strasberg Neighborhood Playhouse. In 1957, she had the part of Clarise on “Gunsmoke” and was offered a part in a 1961 Woody Allen-written variety show, which she turned down to tour with Johnny Cash for just $500 per week. Cash became her husband seven years later.

Of the hundreds of photos of June Carter Cash, none show her in tasteless, revealing attire – even those that could have appeared that way on other women. There is a formal portrait of her with short hair, rare for her, in which she is draped in an off shoulder satin wrap that manages to be classic as opposed to provocative. An informal, home photo shows her in a fuchsia cocktail dress with a fitted bodice, spaghetti straps and a large skirt held full, no doubt, with crinoline slips. Again, beautiful with no hint of sexuality. A candid stage shot of her wearing similar attire shows her smiling broadly, engaged in a little dance and holding the skirts and slips just slightly above the knees. Another color candid stage shot, which appears to be from the 1950s, caught her dancing, holding her ruffled skirt without exposing even her knees.

After her marriage to Johnny Cash in 1968, when June entered her 40s, she remained a beautiful woman who enjoyed the ever-changing fashion scene. Her wedding dress was a powder blue lace street-length sheath with bell sleeves over a blue satin sheath. She wore a headband of blue and white flowers in her long hair.

When cameras capture photos of her in 1970 with Johnny and their newborn son, John Carter, she was modestly and radiantly attired in a lace and ribbon peignoir ensemble.

Over time June is photographed onstage or on album covers with her husband in a variety of fashions from crocheted dresses to western wear to bell bottomed pants to velvet mini-skirts (though barely qualifying as such by the standards of that era). Sometimes they appeared in matching denim, while other times it was leather for both. A dapper dresser himself, John usually wore his trademark black, while June easily accented his look. Her dresses, coats, pant suits and evening attire reflect a range of textures and fabrics from velvet to satin to chiffon to fur to lace to hound’s-tooth to embroidered silk. She adopted accessories popular for the decade, most noticeable in her choice of hats and boots throughout the years.

One particularly telling photo, not only attesting to her fashion sense but to the undeniable bond between June and her husband, is a candid photo taken during a studio recording session. She wears a maxi dress adorned with Native American patterns, a wide leather belt with silver medallions and leather platform shoes. Her husband’s pants are tucked into knee-high lace-up boots, and his arms encircle her from behind.

“She’s the greatest woman I have ever known,” he said of her in his autobiography. “Nobody else, except my mother, comes close.”

When she died May 15, 2003, she was dressed in light blue and placed in a light blue coffin, stylish to the end.