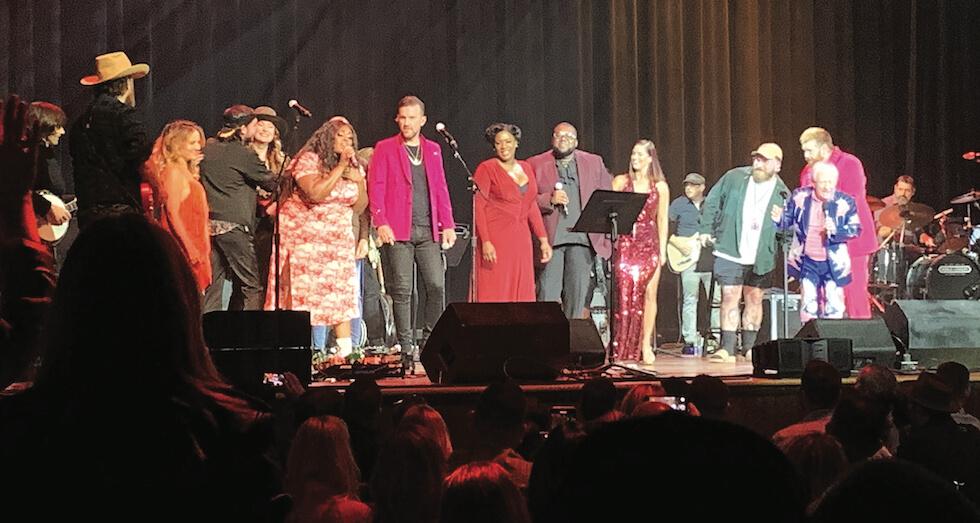 Already a seasoned performer and writer, Jordan began posting funny video shorts of himself as he “hunkered down” in his long-time California home while Covid 19 made its nightmarish rampage across the globe.

Through his simple daily musings, Jordan introduced the world to his gregarious nature, hilarious personality and Southern charm. Memories, stories and common sense anecdotes about his family, childhood and beloved “mama” played a huge role in his video monologues. So did music – particularly the Southern Gospel music on which he has been raised.

Jordan invited musicians to remotely play with him on his Instagram videos, and he sang with them. Sometimes he would just sing alone. During the height of the pandemic, Jordon’s performances and musings delivered in his thick Southern drawl was attracting nearly 5 million viewers daily.

The 4’ 11” Emmy-winning actor was incredulous at he was gaining through his Instagram experience.

“For someone 65 years old to all of a sudden be, like, an internet star…,” he said in an interview with The New York Times. “I’ve loved attention, wanted it my whole career, and I’ve never gotten this kind of attention. I mean, even on ‘Will & Grace,’ winning an Emmy, it wasn’t anything like when you have social media. When you’ve become a success there, it’s unbelievable.”

Jordan was born on April 29, 1955, in the picturesque river town of Chattanooga, Tennessee., and was raised as a devout Southern Baptist. Jordan’s father, a Lieutenant Colonel in the U.S. Army Reserve, was killed in a plane crash when Jordan was only 11 years old. Jordan left for Los Angeles, California, in 1982 with nothing but faith and $1,500 sewn into his pants pocket by his mother, Peggy Ann, now 86.

Like many Hollywood newcomers, Jordon found work in commercials but was soon being tapped for television roles on programs such as “The Wizard,” “Newhart,” “Night Court” and “Midnight Caller.” Jordan worked with the late comedian Richard Pryor in a 1988 comedy movie called “Moving.” He was also a hunchbacked character in a horror spoof film called “Frankenstein General Hospital.”

Jordan focused on writing during the 1990s. He wrote characters such as “Brother Boy” in the theatrical production of “ Sordid Lives” and a character named “Peanut,” a bar fly, in an off-Broadway production of “Southern Baptist Sissies.” Jordan also performed monologues such as off-Broadway’s “Hysterical Blindness.”

In 1996 Jordan recovered from the severe substance abuse habit he had developed in California and in time found renewed success with work on television shows such as “Reasonable Doubts,” “Ally McBeal” and “Body of Evidence.”

A gifted storyteller, he authored a semi- autobiographical film called, “Lost in the Perishing Point Hotel.” He was cast for appearances on shows such as “Judging Amy” and “Desperate Housewives” and was a recurring character on “Will and Grace,” for which he earned an Emmy Award.

In the 2000s Jordan hit his stride as an actor appearing in more than a dozen of films, including “The Gristle,” “Madhouse,” “Missing Pieces” and “Sordid Lives.” He delivered unforgettable dramatic performances in 2011’s “The Help” and this year’s “The United States vs. Billie Holliday.”

He has become a mainstay in the ongoing “American Horror Story” franchise, portraying several characters since 2011. In 2020 Jordan was cast as a main character in a Myiam Bialik’s television sitcom “Call Me Kat,” which has been renewed for a second season.

Unafraid to laugh at himself, Jordan’s proclaims on his website that he is an “all around Southern Baptist celebutante.”

All the Instagram fame promoted the diminutive actor to write a book titled How Y’all Doing, paying homage to the catchphrase that finally brought him international fame. The book has been touted as a Southerner’s storytelling extravaganza. Harper Collins states that it is “an authentic, warm and joyful portrait of an American Sweetheart.”

in Nashville. The idea for the album was born after Jordan was invited to sing on a podcast by Jordan’s friend, Los Angeles songwriter/musician, Travis Howard.

“We started approaching people to sing, and we did that through direct message,” Jordan explained in a Rolling Stone magazine article.

Nearly everyone approached agreed to work on the album with Jordan. Chris and Morgane Stapleton sing a soulful song called “Farther Along.” Brandi Carlisle duets with her version of the song, “Angel Band,” and Tanya Tucker joins him on “When the Roll is Called Up Yonder.” The most celebrated artist to grace the album’s presence is Dolly Parton. Jordan sings with Parton on a gospel standard called “Where the Soul of Man Never Dies.” Other performers on the album are Eddie Vedder, Ashley McBryde, Charlie Worsham, Katie Pruitt and TJ Osborne.

On May 22, 2021, Jordan made his Grand Ole Opry debut with a rousing performance of “Will the Circle Be Unbroken,” among other classic hymns.

Since its release, “Company’s Comin’” has received widespread critical acclaim from press including NPR Music, Billboard, Entertainment Weekly, Vogue, The Washington Post and more. Rolling Stone called it “one of the year’s most surprisingly uplifting listens,” and the Los Angeles Times declared, “The down-home joy and communal revelry of his performances are a balm for these frayed times.”