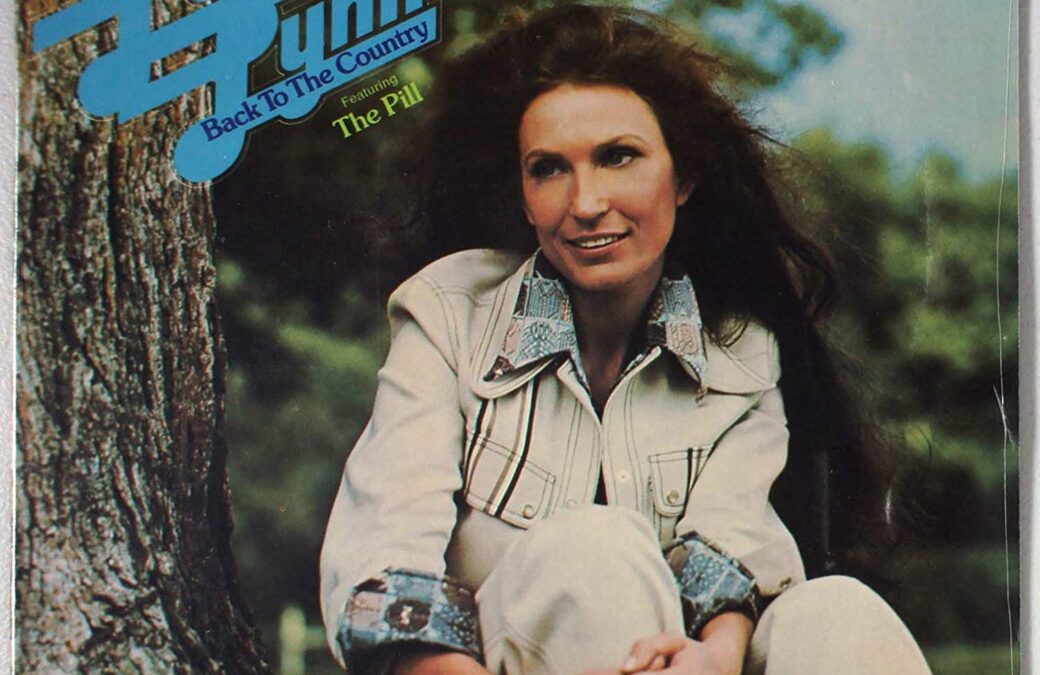 Some songs result from societal changes, and others spark changes in society. Loretta Lynn’s controversial song, “The Pill,” did both.

In an interview last year with songfact.com, Lynn noted that during the 1975 release of “The Pill,” she experienced a “rough time.” She’d recorded the song in 1972, but her label held it back three years fearing it would be rejected by Country Music listeners.

Lynn, born in 1932, was exactly the kind of woman the pill was intended to help. Married in 1948 at age 15 to Oliver Vanetta (Doo) Lynn, she was the mother of four by age 20, well before the pill was available. However, her twins were born in 1964, four years after oral contraceptives went on the market.

“You wined me and dined me when I was your girl,” she sings in “The Pill,” lamenting, “Promised if I’d be your wife, you’d show me the world. But all I’ve seen of this old world is a bed and a doctor bill.”

As anyone who has seen the biopic “Coal Miner’s Daughter” knows, her husband was anything but faithful, which makes the lyrics to “The Pill” even more poignant.

“All these years I’ve stayed at home, while you had all your fun,” she sang. “And every year that’s gone by, another baby’s come.”

Penned by a songwriting team that included Lorene Allen, Don McHan and T. D. Bayless, “The Pill” employs an extended “poultry” metaphor, giving it a comic edge while compounding the sobriety of a woman’s perceived place and very real limitations during the days before birth control was readily available.

The song lyrics were crafted to speak directly to the philandering husband, warning him “You’ve set this chicken one last time” and saying that she is “tired of all your crowin’ how you and your hens play.”

In contrast to the bold declarations that “this incubator is overused” and “this chicken’s done tore up her nest” in “The Pill,” Lynn endured, remaining married to her husband 48 years until his death in 1996, though her marriage was admittedly difficult. She has written candidly about how he slept with her sister-in-law, left her when she was pregnant and was absent for the birth of their son.

“I didn’t need him, but he was my kids’ daddy,” she told 48 Hours in 2002. “Why leave hearts laying on the floor for me. I had to think of my kids. I can’t be that selfish. He broke my heart lots of time, but that woulda broke the kids’ hearts, wouldn’t it?”

During the height of what is now a decades-long career, Lynn’s touring schedule took her away from the family for months at a time, with her earnings expanding and enhancing Hurricane Mills, the family farm and later a tourist attraction near Nashville, Tennessee. As with most stars, rumors circulated about infidelity, but Lynn has reiterated that she was a faithful wife, even addressing longtime speculation about her relationship with duet partner, the late Conway Twitty.

“Everybody thought me and Conway had a thing going, and that’s the furthest from the truth,” she clarified in a PBS documentary about her life, adding, “I loved Conway as a friend, and my husband loved him.”

In “The Pill” the offending “rooster” is told that “it’s gettin’ dark, it’s roosting time” and that the discarded maternity clothing is being replaced with “miniskirts, hot pants and a few little fancy frills.”

“Yeah I’m makin’ up for all those years, since I’ve got the pill,” Lynn sang.

Despite the song being banned from country airplay, Lynn defended it.

“If I’d had the pill back when I was havin’ babies, I’d have taken ’em like popcorn,” she told People magazine. “The pill is good for people. I wouldn’t trade my kids for anyone’s. But I wouldn’t necessarily have had six, and I sure would have spaced ’em better.”

In an interview with Playgirl Magazine, Lynn revealed that she had some unexpected fans in the medical community. Rural doctors thanked her with one telling her that her song had brought more attention to the availability and value of the pill than any pamphlets they’d distributed. Yet, the song almost caused her to be banned from the Grand Ole Opry.

A No. 1 Country hit in Canada and No. 5 County hit on U.S. charts, the song brought Lynn unprecedented publicity and earned her a No. 70 spot on the Pop charts, the highest of her career. At age 85 she is the reigning Queen of Country Music, having written more than 160 songs, released 60 albums and sold 45 million records. She remains the most awarded woman in Country Music with accolades for her singing as well as her songwriting. But in 1975, she influenced a generation of women to draw the line with their mates and take control of their bodies and their families when she sang, “I’m ready to make a deal, and ya can’t afford to turn it down, ‘Cause you know I’ve got the pill. Oh, but daddy don’t you worry none, ‘cause mama’s got the pill.”

In our magazines’ series, “Something About the Song,” writers Claudia Johnson and Sasha Dunavant, a mother-daughter writing duo, explored some of Country’s most enduring – and endearing – songs. Selections for the series could be perennial crowd favorites, songs with groundbreaking subject matter, one-hit wonders, career defining recordings of major stars, songs that started a trend…you get it. The songs have been chosen because they’ve made us stop and think, “There’s something about that song.” Visit us on social media to let our writers know the songs that made a difference in your life. #somethingaboutthatsong