Nudie Cohn: From Rags to Rhinestones 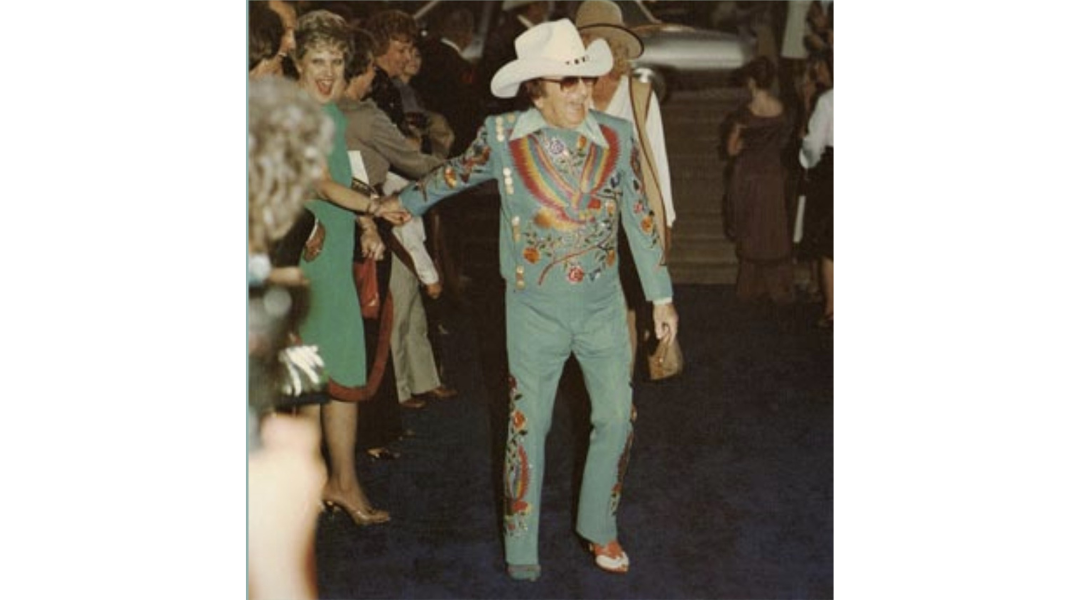 Rhinestone cowboys and rhinestone cars. It seems impossible that a child born in the Ukraine in 1902 could have imagined such things, let alone create them, but that’s what Nuta Kotlyarenko did. At age 11 Kotlyarenko was sent to America by his parents to protect him from widespread persecution of the Jewish community in Czarist Russia.

He worked as a shoeshine boy, a boxer and at other odd jobs as he traveled America until he met and married lifelong partner Helen “Bobbie” Kruger in 1934. During the Depression the Kotlyarenkos supplied showgirls with custom undergarments, which they sold from their New York store, “Nudie’s for the Ladies,” giving Nuta Kotlyarenko the identity by which he was known the rest of his life – “Nudie” Cohn.

In the early 1940s Nudie and Bobbie settled in California and began creating and selling custom clothing from their garage. Drawing attention from performers like Cliffie Stone, Lefty Frizzell and Tex Williams, the business began to flourish, and soon a shop was opened in North Hollywood specializing in Western wear. The Cohns became tailors to Roy Rogers and Dale Evans, who epitomized the popular view of “Country-Western.” A personal friend, Evans delivered the eulogy at Cohn’s 1994 funeral, attended by hordes of former clients.

Perhaps the performer most consistently associated with Nudie’s clothing creations is Porter Wagoner. In 1962 Cohn made an ornately embroidered and rhinestone-studded peach-colored suit featuring a covered wagon on the back and wagon wheels on the legs. He offered it to Wagoner at no cost in an effort to promote Nudie’s of Hollywood’s flamboyant designs, which have come to be known as “Nudie Suits.”

It worked. Nudie soon moved his operation to a larger facility and renamed it Nudie’s Rodeo Tailors. He also garnered a career-long customer in Wagoner, who bought 52 custom designed suits from Nudie, reportedly costing between $11,000 and $18,000.

“He could still fit into every one of them when he died,” recalled Wagoner’s fellow performer Jim Ed Brown.

One of Nudie’s more controversial creations was a suit featuring pills, poppies, marijuana leaves, naked women and a cross crafted for Gram Parsons to wear on the cover of the Flying Burrito Brothers’ 1969 album “The Gilded Palace of Sin.”

However, Nudie did not just tailor people. Between 1950 and 1975 he customized 18 Cadillac and Pontiac convertibles, using such bedazzlements as silver-dollar-studded dashboards, pistol door handles, rifles on the trunk and fenders, hand-tooled leather saddles and longhorn steer horns as hood ornaments. Many of these Nudie Mobiles are privately owned by collectors, but one is on display at the Country Music Hall of Fame in Nashville.

Though Nudie wore his own larger-than-life creations, the diminutive tailor often purposely wore mismatched cowboy boots, to remind himself, he said, of his humble beginnings.