“Okie from Muskogee” Originally Written as a Joke 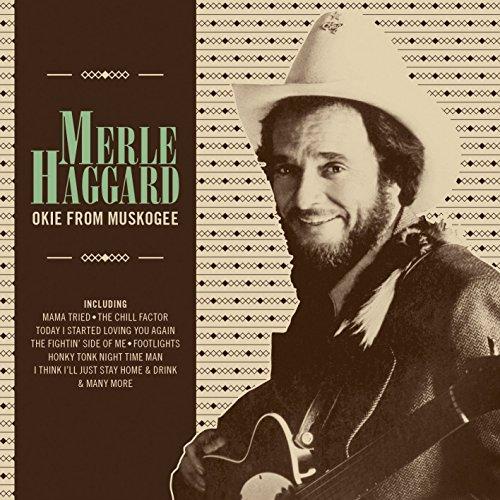 Merle Haggard’s 1969 number one hit “Okie from Muskogee” started as a joke between band members but soon became the most lasting Country music anthem of the Vietnam War era.

According to the story Haggard told numerous times about the concept for the song, he and his band were driving through Oklahoma on Interstate 40. He was familiar with the territory, though he never lived there himself, because his family was from Checotah, Oklahoma, near Muskogee. Haggard claimed that he saw a sign stating, “Muskogee, 19 Miles,” and woke up his drummer, Roy Edward Burris, to joke that he didn’t imagine they smoked marijuana in Muskogee. The pair started laughing about all the things the residents probably didn’t do, and soon it turned into a song.

“We don’t smoke marijuana in Muskogee, we don’t take our trips on LSD, we don’t burn our draft cards down on Main Street, we like livin’ right, and bein’ free,” they wrote, repeating the message, “I’m proud to be an Okie from Muskogee” where “we still wave Old Glory down at the courthouse, and white lightnin’s still the biggest thrill of all.”

Haggard and Burris targeted the “hippies out in San Francisco” as growing their hair “long and shaggy” saying, “beads and Roman sandals won’t be seen” in Muskogee where “leather boots are still in style for manly footwear.”

“We wrote it to be satirical originally,” Haggard said, recalling that after its summer of 1969 release, “people latched on to it, and it really turned into this song that looked into the mindset of people so opposite of who and where we were.”

By fall of ‘69 the song hit number one on the Billboard country music charts and stayed there for four weeks. Sales continued to climb, and it became Haggard’s most requested song during live performances, during which he often played it repeatedly as the crowds demanded.

“Haggard has tapped, perhaps for the first time in popular music, into a vast reservoir of resentment against the long-haired young and their underground society,” Reuters news service observed in February 1970.

Just over a year after its release, “Okie from Muskogee,” achieved gold record status, which was unusual for a Country album during that time. His concert fee tripled to $10,000 per night, and he was named Country Music Association’s 1970 Entertainer of the Year, while the song garnered top awards as Single and Album of the Year.

A big fan of the song was President Richard Nixon, who requested that Johnny Cash play it during a White House concert in 1972. Cash chose not to because, he later wrote, that the song had become a “lightning rod for anti-hippie sentiment.” He opted to play an anti-war song, “What is the Truth?”

Not to be ignored, Nixon issued a personal invitation for Haggard to play at the White House, and in 1973 he did. Nixon’s White House Chief of Staff HR Haldeman wrote in his diary that the evening was a “flop” because the audience did not appreciate country music “except when Haggard did his ‘Okie from Muskogee’… which everybody responded to very favorably, of course.”

In several interviews over the years, Haggard said he wished he’d never written the song. He told GQ magazine in 2012 that it set his career back 40 years. He felt it distracted audiences from appreciating his talent and stamped him with what he saw as an undeserved “political image.”

“Okie made me appear to be a person who was a lot more narrow-minded, possibly, than I really am,” Haggard told Quarter Notes magazine in 1981, expounding in a 1990 interview with Bryan Di Salvatore of Ornery magazine “what bothers me most is the people that identify with it. There is the extremity out there…It made people forget that I might be a much more musical artist than they give me credit for.”

For half a century “Okie from Muskogee” has been covered by artists from various genres, parodied and performed in concerts and karaoke bars. When singer-songwriter Kris Kristofferson sang it at his 1972 Live At The Philharmonic concert, he said it was “with apologies to our good friend Merle Haggard, who is neither a redneck or a racist, he just happens to be known for probably the only bad song he ever wrote.”

In 1988 Haggard characterized the song in an interview with the Birmingham Post-Herald as “kind of a patriotic song that went to the top of the charts at a time when patriotism wasn’t really that popular.” Twelve years later he told American Songwriter magazine that when he wrote “Okie from Muskogee” he was “dumb as a rock.”

“Most of America was under the same assumptions I was,” he said. “They had me fooled, too. I’ve become educated. I’ve learned the truth since I wrote that song. I play it now with a different projection. It’s a different song now. I’m different now. I still believed in America then. I don’t know that I do [believe] now.”

Granted, Haggard made very conflicting statements about the song, but one message was always clear: he supported American soldiers even if he came to understand why the war protests were valid.

“During Vietnam, there were all kinds of protests,” he told The Boot in 2010. “Here were these [servicemen] going over there and dying for a cause, we don’t even know what it was really all about…These soldiers were giving up their freedom and lives to make sure others could stay free.”

Four years before his 2016 death, Haggard told The Music Hall magazine that the real message of the song was “pride.”

“I think it became an anthem for people who were not being noticed or recognized in any way – the silent majority,” he said. “It brought them pride. And today the song still speaks to conditions going on in this world.”

The comment was reminiscent of a concert review published in The Atlantic Monthly in 1969 after Haggard performed the song in Dayton, Ohio.

“Suddenly they are on their feet, berserk, waving flags and stomping and whistling and cheering … and for those brief moments the majority isn’t silent anymore.”