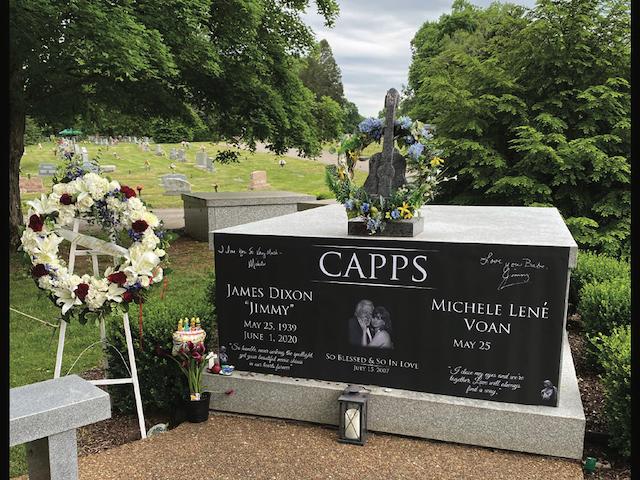 Born on May 25, 1939, in Fayetteville, North Carolina, to the late Tommie and Alice Stevens Capps, Jimmy began playing guitar when he was 12. At age 19 he was invited to join the Louvin Brothers, soon making his first appearance on the Grand Ole Opry with the duo in 1959.

Until the time of his passing Jimmy continued to play lead guitar as a member of the Grand Ole Opry staff band for more than 61 years, longer than any other musician. In 2018 to mark his 60th year at the Grand Ole Opry, the band room was named the “Jimmy Capps Music Room.”

“Jimmy helped define country music for more than one generation of fans,” said Dan Rogers, VP & Executive Producer, Grand Ole Opry. “His musicianship will live on every time somebody somewhere plays ‘The Gambler,’ ‘He Stopped Loving Her Today’ or countless other recordings on which he played. He was an absolute fixture on stage and backstage at the Opry. I personally reveled in walking around the corner from my office before showtime and seeing him holding court with his smile and his guitar, talking with longtime friends and newcomers alike. The difficult part of being so close-knit at the Opry is that losses like this cut deep. While the Opry will never be the same, it’s better for Jimmy Capps having played his part in it for more than 60 years.”

Along with his onstage work, Jimmy was an in-demand session musician known for his smooth playing style of both acoustic and electric guitar on recordings like Tammy Wynette’s “Stand by Your Man,” Barbara Mandrell’s “I Was Country When Country Wasn’t Cool,” Alan Jackson’s “Here in the Real World,” the Oak Ridge Boys “Elvira,” Ronnie Milsap’s “Smoky Mountain Rain,” Reba McEntire’s “How Blue,” Kenny Rogers’ “The Gambler,” George Jones’ “He Stopped Loving Her Today,” George Strait’s “Amarillo by Morning” and many others.

“I am convinced that Jimmy was the most-loved person in Nashville,” said Scot England, author of Jimmy’s biography. “EVERY artist loved him so much.” While his book ‘The Man in Back’ was a great tribute to him, I thought he deserved even more.”

In addition to the book, England produced a TV documentary on Jimmy’s life. Both are available at jimmycappsbook.com.

“When he saw it, he cried and cried,” England recalled. “Jimmy said, ‘It’s kind of like going to your own funeral.’ I replied, ‘I wanted to bring your flowers while you were still here. I wanted you to see how much you mean to everyone.’ When it comes to the greatest men who ever walked the earth…I’d put Jimmy Capps in the top two, just behind another JC, Jesus Christ.”

Over the years Jimmy played on many TV shows, including “The Statler Brothers Show,” “The Wilburn Brothers Show,” various CMA shows and others. Since 2009 Jimmy regularly appeared on “Larry’s Country Diner.”

“Jimmy’s book is well titled ‘The Man in Back,’” said Larry Black of “Larry’s Country Diner.” “He never forced himself to the front but was the concrete necessary to hold the foundation in place. There was nothing you couldn’t ask him to do. If you spent much time around Jimmy you never heard him say a bad word about anybody. He was a treasure to know and will be missed greatly.”

The United States Army veteran was, along with wife Michelle, a member of the First Apostolic Church of Nashville. In addition to his wife, he is survived by son, Mark, and his wife, Tara Solomon-Capps, son Jeff Capps, and two grandchildren, Summer Capps and Mollie McKenzie Acuff.

“The loss of Jimmy Capps will be felt on so many levels…certainly at the Opry, on so many recording sessions, “Larry’s Country Diner,” “Country Family Reunion,” the Musician’s Hall of Fame…and most of all by his family and many, many friends and fans,” said Jeannie Seely. “He will be remembered not only as a great musician but as one of the most wonderful men you could ever know. I feel it is ironic and yet appropriate that the CMA hashtag said #theshowmustbepaused. Yes, Jimmy, it must.”

Rhonda Vincent, recalled time she’d spent with Jimmy at the Opry as well as on the “Diner” and “Reunion” shows and cruises.

“I’ve sailed many music cruises with Jimmy, and I know he was so honored to be inducted into the Musicians Hall of Fame,” Vincent said. “He was always humble and kind and will be missed by many. Rest In Sweet Peace, Jimmy Capps.”

Gene Watson said that he was “just devastated” to learn of Jimmy’s passing, calling him “a great friend personally but a great friend to country music,” had passed.

“ Jimmy Capps was one of the greatest guitar players ever, rightfully in the Musicians Hall of Fame as well as the NC Hall of Fame,” Watson observed. “He received many accolades in his life but nothing greater could be said that he was a friend to all who met him.”

Because of concerns about the spread of Covid-19, Jimmy’s memorial service was held at the Grand Ole Opry House with only close friends and immediate family in attendance. Fans, colleagues and friends were invited to watch the service online. Many of Jimmy’s longtime friends, including Jimmy Fortune, and cast members from “Larry’s Country Diner” were named among his pallbearers.

“There’s a hole in country music and a hole in our heart,” Fortune said. “One of my best friends in the world went to be with the Lord. We are all trying to hold each other up over this. He was the best friend a guitar could ever have, and he always made sure the singer stood out. That’s just the way he was; he always thought of others first. He was a true gentleman and a true professional in every way. I’ll miss you until I see you again.”

Emy Jo Bilbrey, wife of “Diner” regular Keith Bilbrey, recalled how she and Keith were assigned to be condominium “roommates” with Jimmy and Michelle during the month-long stays in Branson for performances of “Larry’s Country Diner.”

“Everybody knew that the four of us were night owls and late risers,” Bilbrey said. “We had soooo much fun together, and thus the name “roomies” evolved! Yes, we’ve lost “Roomie” and are heartbroken! Yes, his unbelievable musical talent will be missed, but what I will miss most is his sweet and sometimes mischievous smiles, his belly laughs, his hugs, his gentle soul and him yelling out to me, ‘Hey Roomie!” His tremendous love for Michele and family was so obvious! If you knew him, you loved him! We will miss you Jimmy Capps! I know we will always treasure our adventurous travels and times we had together with Jimmy and Michele.”

Nadine from “Larry’s Country Diner” said she’d remember Jimmy as “the kindest and most humble man I have ever met.”

“Being together with the Diner family and losing one of them is like losing part of yourself, at least part of your heart,” Nadine said. “I can see that head thrown back and hear the belly laugh and see Jimmy do that little clap he did when he was laughing! He lived well and loved well and will remain in our hearts until he meets us at the gates of Heaven! Play on Jimmy, I know the Heavenly Band just got a stellar guitar player added, and your buddies are gathered round.”

“He was such a talented musician, great friend and a huge component of both the Diner and the Opry,” Arrendale said. “The orchestra in heaven has received a shining first chair member! He will be greatly missed but always remembered.”

Entertainer T. Graham Brown, who appeared several times on “Larry’s Country Diner” as a musical guest, summed up what most felt about Jimmy.

“I have been blessed to work with Jimmy down through the years,” Brown said. “He was a universally loved, Godly man, a double-super cool Nashville cat, and you couldn’t ask for a better friend… Rest in peace, pal.” 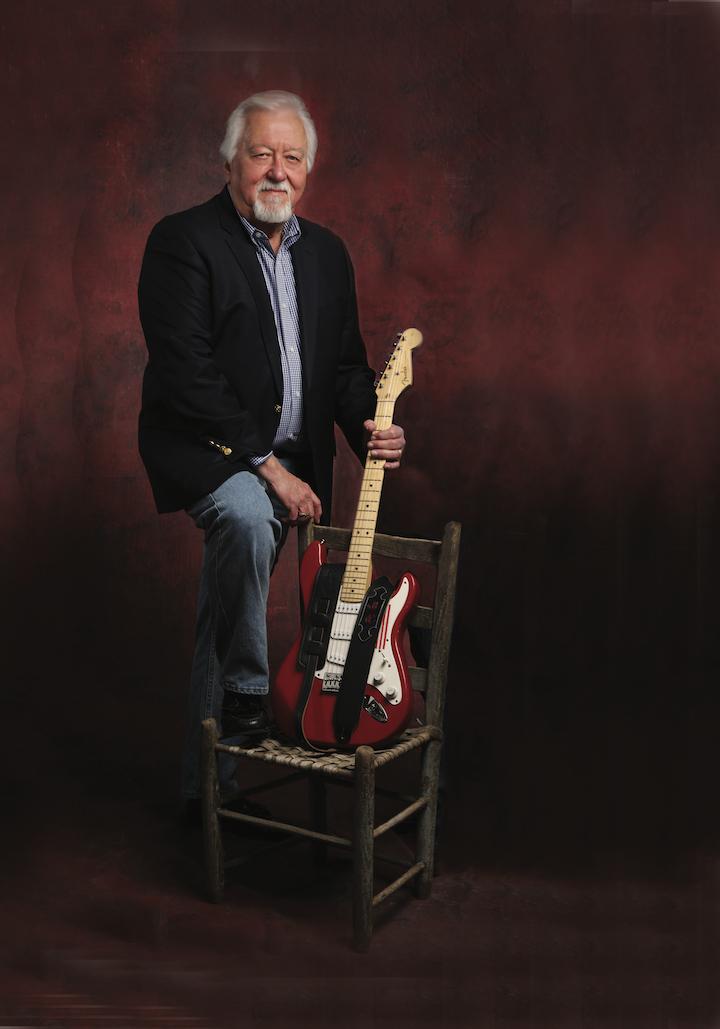