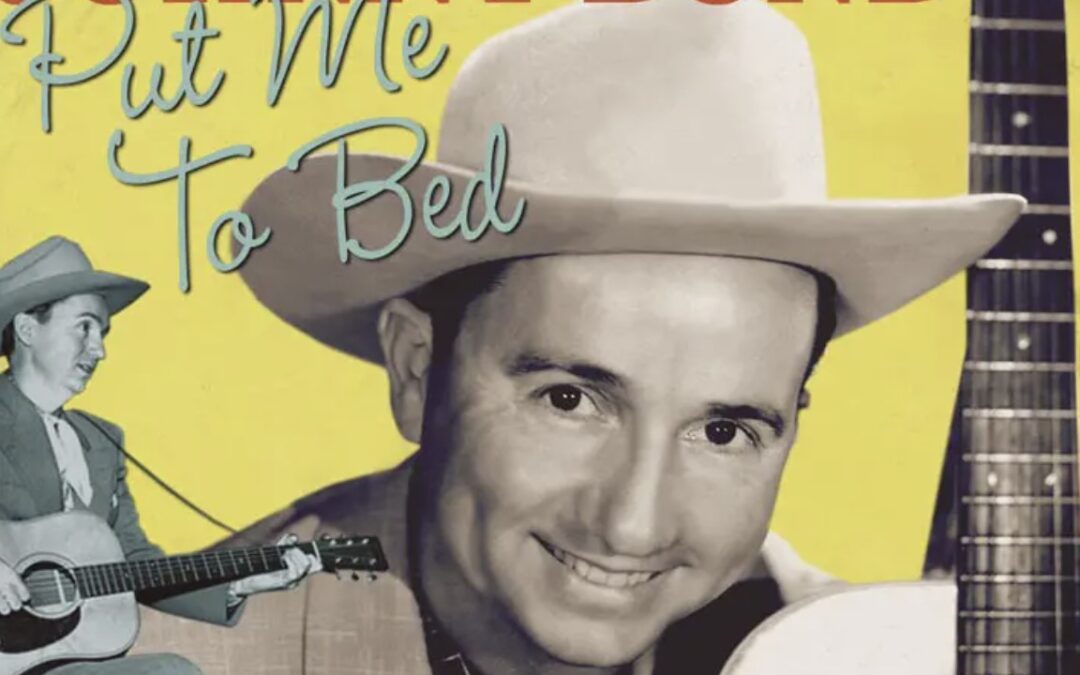 Born into poverty in 1915 in Enville, Oklahoma, Cyrus Whitfield Bond was inspired by musical legends like Milton Brown and Jimmie Rodgers. Bond learned as a child to play the trumpet, ukulele and guitar. At age 22 he changed his name to “Johnny Bond” and moved to Oklahoma City, where he formed a trio with Jimmy Wakely and Scotty Harrell that eventually became the Bell Boys.

Bond would go on to become a radio, television and movie performer, a celebrated songwriter and a successful recording artist.

In 1947 he released several top five hits, including “So Round, So Firm, So Fully Packed,” “The Daughter of Jole Blon” and “Divorce Me C.O.D.”

The very next year Bond produced a top ten hit, “Oklahoma Waltz.” He continued on his winning streak in 1949 with the hits, “Tennessee Saturday Night” and “Till The End of The World.”

After landing a spot in the Roy Rogers movie, “Saga of Death Valley,” the trio appeared on Gene Autry’s radio show, Melody Ranch, until it was canceled in 1956. Later in the ‘50s he was a regular on the Los Angeles-based country music television series Town Hall Party. A versatile talent, Bond also appeared in 38 movies, such as David O. Selznick’s “Duel in the Sun,” “Six Lessons from Madame La Zonga,” “ Wilson” and “Song of the Wasteland.”

In the mid 1940s, Bond had begun releasing his own written material like “I’m A Pris’ner of War,” “Der Fuhrer’s Face,” “You Let Me Down” and “Love Gone Cold.”

He soon established himself as a songwriter as solidly as an entertainer, and by 1957 he had written 123 songs, among them some major hits for various artists across the following decades.

Artists such as Bob Willis, Jimmie Dean, Sons of the Pioneers and Foy Willing, covered, “Cimarron,” a song Bond wrote after seeing the movie of the same name.

“Cimarron roll on to my lonely song, carry me away from these skies of gray,” the lyrics speak to the Cimarron River, promising, “Though I’m feeling blue, I’ll roll on with you.”

“Tonight I’m sad my heart is weary wondering if I’m wrong or right to dream about you though you’ve left me; I wonder where you are tonight.” Bond wrote.

Bond’s “Tomorrow Never Comes” laments, “Many weeks have I waited, many long nights have I cried, just to see that happy morning when I’d have you right by my side.”

Hank Thompson, Ernest Tubb and Marty Robbins recorded “I’ll Step Aside,” which Bond himself had written and recorded earlier in his career.

Tex Ritter, Walter Brennan and Marty Robbins recorded their own renditions of “Conversations With A Gun,” Bond’s poem set to music in which the performer reminds the gun of its part in the history of the wild West.

Today I burned your old love letters, I burned them gently one by one, Before I’d light the flame I’d read it, To try and find the wrong I’ve done,” Bond penned.

Bond’s light-hearted and humorous personality showed through his original work. In 1957 Columbia Records did not renew Bond’s songwriter’s contract, so he signed with Starday, where he remained for more than a decade. Bond was encouraged to write “drinking songs” that had become popular in the 1960s. Though he was not enamored with the subject matter, he was successful.

He continued to record, releasing 14 albums between 1960 and 1971. The only number one hit was 1964’s spoken-word recording of “Ten Little Bottles,” which he wrote about a man forced by his wife to empty his bottles of homebrew, and by the time he’s, tasted each one and is so intoxicated that he cannot tell his story.

Bond died of a stroke in 1978 and was posthumously honored with election into both the Country Music Hall of Fame and the Nashville Songwriters Hall of Fame.

Throughout the history of Country Music, thousands of songs have been written and performed. Many of those songs were written by famous performers. Some were written for a star’s own records, while others were created to be sung by another artist. This story is part of the Singer-Songwriter Series that explores some of those talented individuals whose work we know and love that have been published in our magazines.