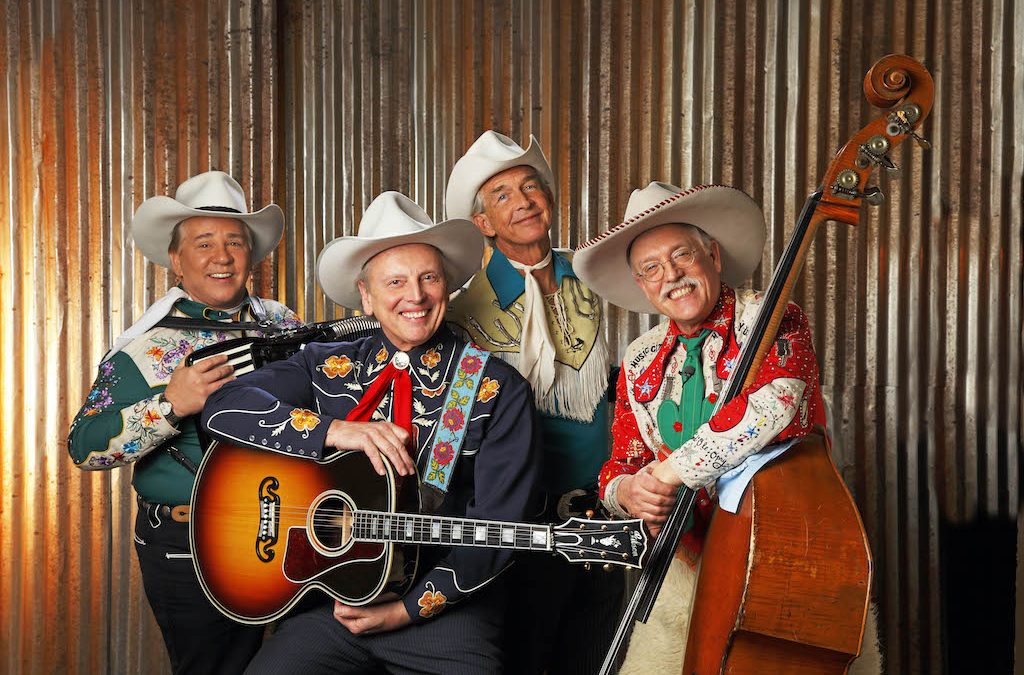 Four and a half decades is a long time for people to stay together. They get married, share joys and successes, have children and grandchildren, work, travel and weather life’s storms.

Wait! That sounds like a marriage, but it’s not. It’s the career story of four men who comprise the two-time Grammy-winning cowboy quartet Riders in the Sky.

“We’ve been together longer than we’ve been married,” said Douglas “Ranger Doug” Green, the group’s guitarist and baritone vocalist.

Riders in the Sky also includes bassist Fred “Too Slim” LaBour, fiddler and tenor vocalist Paul “Woody Paul”Chrisman and accordionist Joey “The Cowpolka King” Miskulin. Since first singing together in 1977, they have made more than 6,000 concert appearances in all 50 states and 10 countries, appearing in venues everywhere from county fairs to Carnegie Hall. They have performed at the White House for both Democratic and Republican administrations and at Major League Baseball’s winter meetings for both American and National Leagues, but there is one venue that never ceases to inspire them.

“It is always a thrill to perform on the Grand Ole Opry stage and to be able to introduce some young artist breathless with excitement,” Green said.

The quartet is the only Grand Ole Opry member to perform exclusively Western music, reviving and revitalizing the genre made famous by Sons of the Pioneers, Gene Autry and Roy Rogers.

“These were our heroes growing up – the romantic notion of the singing cowboy,” said Green, explaining why Riders embraced the genre and adopted the colorfully embroidered and bejeweled costumes designed by Nudie the Rodeo Tailor for television and movie cowboys of the 1940s and ‘50s and now custom crafted by Manuel in Nashville.

A highlight of the Riders’ career – and there have been many highlights – was a chance to work with Rogers in 1979.

“We almost could not speak,” said Green recalling the first meeting with Rogers, who Green remembers as a “a real gentleman.”

The quartet honors Rogers’ legacy in a new album of Rogers’ songs set for release in 2015, adding to their discography of more than three dozen albums. Though they have been recipients of a multitude of awards, two Grammy awards attest to their multi-generational appeal. Riders performed “Woody’s Round Up” in “Toy Story 2,” with the album of the same name, garnering Riders their first Grammy Award in 2001 for “Best Musical Album for Children.” Two years later, Riders roped their second Grammy in the same category, for “Monsters Inc. – Scream Factory Favorites,” the companion CD to Pixar’s award winning movie.

To remain connected to their younger audience, these performers of traditional music communicate using Facebook, Twitter, Google+ and Blogger. Green said that one common form of technology would have been very handy in the group’s early years.

“Slim got left six times at truck stops,” Green admits. “Now that we have cell phones, that doesn’t happen much anymore.”

Apparently, the missing band member was forced to hitchhike to the next venue or all the way home.

“Once when we left him, we pulled into a truck stop later that day, and Slim hopped out of a semi he’d caught, got in with us and we went on our way,” Green laughed.

Green said that for him the greatest aspect of spending half a lifetime on the road and the stage has exposure to personalities of other performers beyond their stage personae.

“I like to just sit down with them, hear them talk or crack jokes,” he said. “That’s why I think ‘Larry’s Country Diner’ is such a great show. It’s just a joy to be there with the others and really get to visit with them.”