The Maddox Brothers and Rose 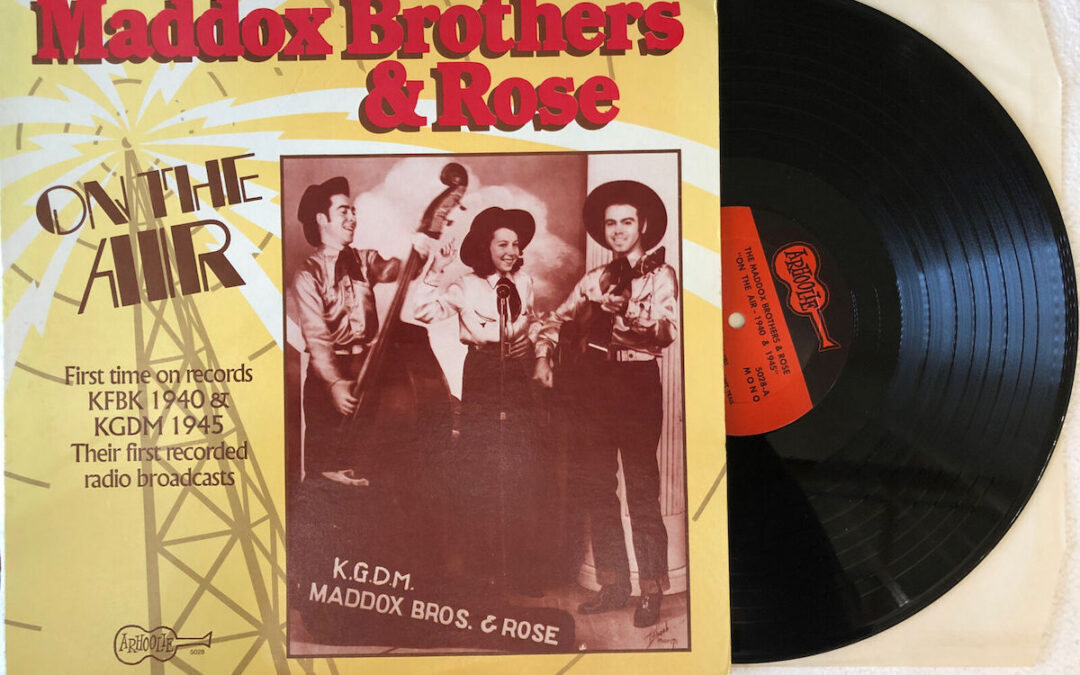 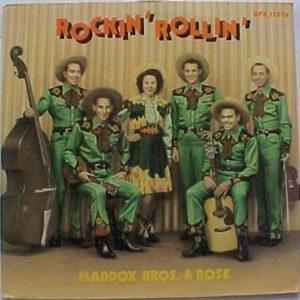 Fred, Cliff, Don and Cal Maddox and their sister, Rose, known professionally as “The Maddox Brothers and Rose,” spent their childhood during the early years of The Great Depression as sharecroppers.

Originally from Boaz, Alabama, the Maddox family relocated to California in 1933. The children and their parents hitchhiked and rode the rails to harvest crops as far to the east as Arizona and as far north as Washington. They worked from sun up to sun down and often slept and ate on the ground where they worked.

In 1937 the children formed a musical group and soon began performing on Modesto, California’s, radio station, KTRB. In 1939 the Maddox boys and 11-year-old Rose entered a hillbilly band competition at the Centennial Sacramento State Fair and were officially named, “California’s Best Hillbilly Band.” A year later The Maddoxs performed on radio station KFBK in Sacramento, California, exposing their talents to the entire West Coast.

Red, Cal and Don Maddox were drafted into World War II. Their little sister, Rose, missed her brothers terribly and tried to have some solo success. While their other brothers were at war, Henry and Cliff played for other bands. Rose persistently urged Bob Willis to hire her to be in his band, The Texas Playboys, but he was uninterested. Rose warned Willis that her brothers would be back from the war someday. Rose was right about that. In 1946 The Maddox Brothers and Rose were together again. The group recorded for 4 Star Record Company in 1947. They had a high intensity performance that consisted of Swing, Boogie, early Rock and Roll and Folk music. People were drawn to The Maddox Brothers and Rose’s type of music, comedy and sound. Their talent and outlandish performances mesmerized many people.

Fred, Cal and Rose formed a trio and called themselves “The Alabama Outlaws.” They later would gain the name, “America’s Most Colorful Hillbilly Band.” The band signed with Columbia Records in the 1950s. The Maddox Brothers and Rose recorded more than 40 singles with the label. They opened their show with the song, “George’s Playhouse Boogie” and closed each show with their theme song, “I Want To Live and Love.”

During the 1950s, the siblings performed on the Grand Ole Opry and Louisiana Hayride. They performed with several musicians, including lead guitarists Gene Breeden, Jimmie Winkle and Roy Nichols, and steel guitarist, Bud Duncan. The Maddox Brothers and Rose were popping during the Rockabilly heyday in the mid 1950s. Rose eventually signed with Capitol Records around the same time the members of The Maddox Brothers and Rose went their separate ways in 1957.

It is believed that Fred Maddox’s Bass hit the first Rock and Roll note. The instrument is on display at the Experience Music Project in Seattle, Washington. Red Maddox opened a nightclub, “Fred Maddox Playhouse.” The club was very successful during the late 1950s and the early 1960s. Cal assisted Rose in building a powerful solo career. She later began singing for Dave Stogner and Arky Stark. Rose had a series of solo hits, such as “Gambler’s Love,” “Sing A Little Song of Heartache,” “The Philadelphia Lawyer,” “The Tramp On The Street,” and her biggest hit, “Conscience I’m Guilty.”

Rose and Hee Haw tycoon, Buck Owens, also had a number of chart-topping songs, including “Sweethearts In Heaven,” “We’re The Talk of The Town,” “Loose Talk” and “Mental Cruelty.” Rose began having heart attacks in the 1960s and her career suffered a great deal because of her poor health. She reportedly had the ability to sing all different styles of music, including Gospel, Hillbilly and Rockabilly. Rose told a source, “I sounded like nobody else, and I guess that’s why I was so distinctive.” After leaving Capitol Records in 1967, Rose recorded with Starday, Decca and King Records. Rose’s brother, Henry Maddox accompanied his sister in several of her 1970s and 1980s recordings.

Rose recorded two records for Arhoolie Records, including her album, “Queen of the West.” Merle Haggard and The Strangers and Emmylou Harris also sang back vocals for Rose in her early 1980s songs. Rose’s son died in 1982. In 1987 she recorded the “Rockabilly Reunion” album with rockabilly sensation, Glen Glenn. Don Reno, Bill Monroe and Red Smiley aided Rose in singing backup on, “Rose Maddox Sings Bluegrass.” The album is critically considered to be Rose’s most successful record.

Bluegrass musician, Vern Williams backed a few of Rose’s Bluegrass style recordings in the 1980s. Rose had a serious heart attack in 1987. The star had no insurance during her illness, so fund-raisers and benefits were held in her honor. Rose Maddox performed through the late 1980s. She received a Grammy nomination for her album, “$35 and a Dream” in 1994. Rose died on April 15, 1998, in Ashland, Oregon. Henry, Cliff, Cal and Fred have also passed away. Don Maddox died Sept. 12, 2021.
– story by Sasha Dunavant, Country Reunion Music © 2022