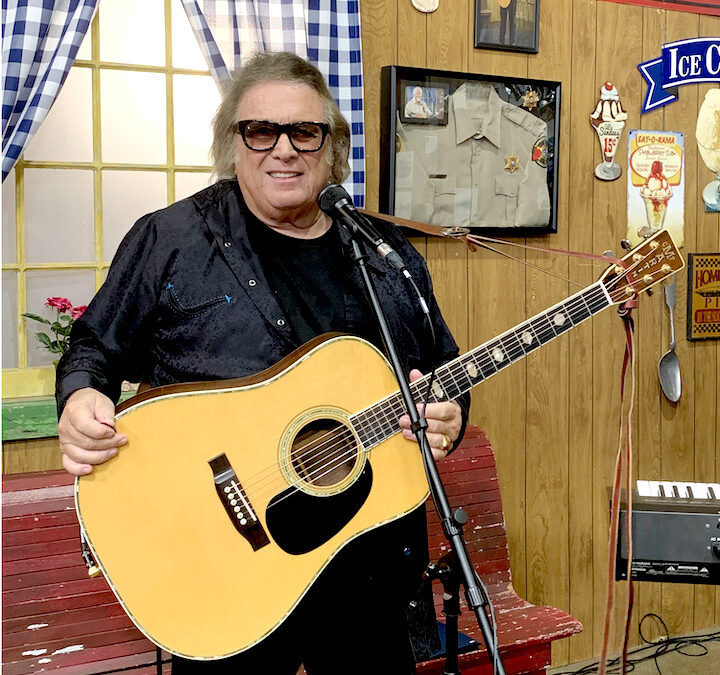 It’s been more than 50 years since Don McLean’s “American Pie” became a part of American history. “American Pie” was issued as a double A-side single in November 1971 and charted within a month. Interest from the media and public sent the single to No. 1 in the USA and McLean to international superstardom.

Every line of the song was analyzed time and time again to find the real meaning. Adding to its mystery McClean refused for decades to sanction any of the many interpretations. The song is long – more than 800 words, and the record is almost nine minutes long. Finally McLean spoke about this song when he decided to sell his original 16-page working manuscript of the lyrics at auction for $1.2 million.

For the Christie’s auction catalog in 2015, he made the following statement.

“For more than 40 years I have rambled around every state of the union and many, many countries of the world. My primary interests in life have been America, singing, songwriting, and the English language. I love the English language as much as anything in life and words really do mean something. I thought it would be interesting as I reach age 70 to release this work product on the song American Pie so that anyone who might be interested will learn that this song was not a parlor game. It was an indescribable photograph of America that I tried to capture in words and music and then was fortunate enough through the help of others to make a successful recording. I would say to young songwriters who are starting out to immerse yourself in beautiful music and beautiful lyrics and think about every word you say in a song.”

“American Pie” was named one of the Top 5 Songs of the 20th Century by the Library of Congress National Recording Registry, and in 2002 it was inducted into the Grammy Hall of Fame.

American Pie has been covered by dozens of artist, including Madonna, who’s 2000 recording was a No.1 hit in the U.K. and reached No. 30 in the U.S.

However, McLean did not give permission for the name “American Pie,” which he trademarked decades ago, to be used for a series of movies by the same name.

“I wish to state on Mr. McLean’s behalf that, in response to many inquiries from fans throughout the world, neither Mr. McLean or his song are related in any way to the Universal motion picture, ” McLean’s attorney stated after the 1999 release of the first “American Pie” Movie. ” However, Mr. McLean, as the owner of the title, came to an agreement with Universal with regard to the use of his trademark.”

McClean told CFR News that by trademarking the phrase “American Pie” he had “stopped a lot of people from fooling around with it.”

McLean was born on Oct. 2, 1945, in New Rochelle, New York, to Elizabeth and Donald McLean. By the age of five he had developed an interest in all forms of music and would spend hours listening to the radio and his father’s records. Childhood asthma meant that he missed long periods of school. While he slipped back in his studies, his love of music was allowed to flourish. He would often perform shows for family and friends.
As a teenager, he purchased his first guitar (a Harmony F Hole with a sunburst finish) from the House of Music in New Rochelle and took opera lessons paid for by his sister. These lessons combined with many hours in the swimming pool, helped Don to develop breath control, which would later allow him to sing long, continuous phrases in songs such as “Crying” without taking a breath. The exercise also meant his asthma improved.

While at Villanova University in 1963, McClean met and became friends with singer Jim Croce, who was later killed in a plane crash. He attended night school at Iona College, and in 1968, graduated with a Bachelor’s degree in Business Administration but turned down a prestigious scholarship to Columbia University Graduate School in favor of becoming resident singer at Caffe Lena in New York. Iona College conferred an honorary doctorate on McLean in 2001.

While resident at Caffe Lena, the New York State Council for the Arts invited McLean to become their Hudson River Troubadour. He accepted and spent the summer travelling from town to town in the Hudson Valley, giving talks about the environment and singing songs for whoever would turn up to listen.

A year later, he was a member of the first crew of the Sloop Clearwater. With Pete Seeger, they travelled the Atlantic seaboard giving concerts at each port. In 1969, Don recorded his first album, “Tapestry,” in Berkeley, California. The student riots were going on outside the studio door as McClean was singing his self-penned “And I Love You So” inside.

The transition to international stardom began with the1971 release of “American Pie” from his album of the same name. The album reached number 1 within two weeks of release and was certified gold within six months, spending almost a year on the Billboard album charts. The “American Pie” album remained at No. 1 in the UK for seven weeks in 1972 and in the U.K. charts for 53 consecutive weeks.

The second single, “Vincent,” which McLean wrote about painter Vincent Van Gogh, charted in March 1972 going on to reach U.S. No. 2 and U.K. No. 1.

McLean credits his 1997 performance of “American Pie” at Garth Brooks’ Central Park concert, attended by more than 500,000 people, as the beginning of his third career comeback.

“Brooks was joined on stage by two surprise guest stars, Billy Joel and Don McLean, who brought down the house with an acoustic rendition of “American Pie,” CNN reported.

According to Don, his first “comeback” had been the release of “Vincent” and the second, the North American release and massive success of “Crying,” his 1982 cover of a Roy Orbison tune.

McLean’s body of work has remained relevant and revered, and he has been honored for his contributions. McLean wound up the 20th century by performing “American Pie” for President Clinton at the Lincoln Memorial Gala In Washington D.C.

In 2004 he was inaugurated into the National Academy of Popular Music Songwriters’ Hall of Fame.  In January 2018, BMI certified that “American Pie” and “Vincent” had reached five million and three million airplays respectively. His song, “And I Love You So,” was the theme for Prince Harry and Megan Markle’s wedding later that year. In 2019 his star was added to the Las Vegas Walkway of Stars.

Having released 21 studio albums, earlier this year McLean signed a contract with Time Life to release his catalog of recordings as well as a much-anticipated new album, “Still Playin’ Favorites.”

“American Pie” will be featured in the upcoming “Avengers Black Widow” and the Tom Hanks movie “BIOS,” both set for release in 2021.

McLean, who turned 75 in October, was a recent guest on “Larry’s Country Diner.” Before the taping he took a moment to talk with CFR News, sharing his excitement about recent projects like building his extensive YouTube channel.

“It’s a receptacle for all kinds of videos, concerts, recordings and specials that I own,” McLean said, adding that his channel includes a record store. “Everything is a big record store in the sky.”

He’s also working on a feature documentary, ‘The Day The Music Died: The Story Behind Don McLean’s American Pie,’ set for release at the end of 2021. The project’s producer, Spencer Proffer, is also working on the new stage play that will revolve around McLean’s deep catalog, which includes “Vincent,” “Castles in the Air” and “Wonderful Baby,” as well as a children’s book based on his most famous song.

McLean, who resides in Maine and Palm Desert, California, told CFR News that he is eager to return to touring and plans a worldwide tour beginning in 2021 if Covid-19 does not prohibit travel.