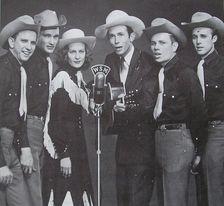 Every musical genre has its tales of immeasurable losses during tragic tours – bluesmen Robert Johnson and Stevie Ray Vaughan, rockers Buddy Holly and Ronnie Van Zant, pop stars Jim Croce and Ricky Nelson, R&B singers Otis Redding and Aaliyah and big band leader Glenn Miller are among the sad examples. Country music, too, has lost its share of legends while touring, including Patsy Cline, Cowboy Copas and Hawkshaw Hawkins in 1963 and Jim Reeves in 1964.

Before any of these, however, as the new year of 1953 began, music lost one of its most talented songwriters and performers somewhere between Knoxville and Oak Hill, W.Va. when 29-year-old Hank Williams slipped into eternity in the back of a pale blue 1952 Cadillac.

For Williams, 1952 had been a trip of its own. Within the year he’d divorced the mother of his son, Hank Williams Jr., and had remarried in October. A pregnant lover was expecting his daughter, now known as Jett Williams, who was born within a week of his death. He moved at least four times among three states, continued to suffer from alcohol abuse, deteriorating health and chronic pain and had been banned from the Grand Ole Opry. Yet, eternal classic “Jambalaya” was among the many hits that made him the biggest selling country music artist for 1952.

Williams’ holiday schedule had him set to perform in Canton, Ohio, on Jan. 1, 1953, after a New Year’s Eve concert in Charleston, W.V. Arrangements were made for Charles Carr, a 17-year-old Auburn University student and son of one of Williams’ most trusted friends, to drive the singer from Williams’ home in Montgomery, Ala., to Knoxville, where he would catch a flight to the West Virginia venue. Though the plane left the airport as planned, it soon returned Williams and his teenage driver to Knoxville due to treacherous fog, and the performance was canceled.

Carr and Williams checked into Knoxville’s Andrew Johnson Hotel, where Williams was supposed to eat and rest. Pain-ridden and troubled throughout the trip (as well as all his adult life), Williams had been ingesting substantial amounts of alcohol along with the prescription drug chloral hydrate and had received several shots of morphine to ease back pain in the days and hours before Carr helped Williams into the back of the Cadillac when they left Knoxville around 11 p.m. to drive through the darkness to Ohio.

During interviews in the years since that final road trip, Carr has recounted his memory of being stopped for speeding near Blaine, W.Va., and some time later, his discovery of Williams’ cold, stiff body between the rural West Virginia towns of Mount Hope and Oak Hill. Though most historians agree that Williams died after crossing the Tennessee state line at Bristol, that mystery of where the tour ended for Williams may never be solved.

An Associated Press story printed Jan. 1, 1953, in The Los Angeles Times identified the deceased Williams as a “onetime shoeshine boy” who was “a singer and composer called the King of the Hillbillies by his followers.” The article reported that he was employed by KWKH radio in Shreveport, La., and was under contract to MGM Recording Co. and MGM Pictures.

“Williams sang doleful mountain ballads in a nasal voice accompanying himself on a guitar, which he began playing at age 6,” the AP story stated. “The lanky singer shot to fame with his recording ‘Lovesick Blues.’ The record sold more than one million copies.”

At the time of the AP story’s distribution, no cause of death had been released. By Jan. 2, 1953, Dr. Diego Nunnari had signed Williams’ death certificate, determining that death was from “acute right. ventricular dilation.” William’s occupation was given as “radio singer.

On Sunday, Jan. 4, 1953, family members viewed Williams’ body before it was transported four blocks to Montgomery’s Municipal Auditorium, where as many as 25,000 mourners were estimated to have passed by the open silver casket. More than two tons of flowers were sent.

According to an Alabama state historic marker, some 2,750 mourners crowded inside for the actual service, while another 20,000 stood outside in the cold. Williams’ band, the Drifting Cowboys, reunited to sing, and other performances included Ernest Tubb singing “Beyond the Sunset” followed by Roy Acuff with “I Saw the Light” and Red Foley with “Peace in the Valley.” He was buried at Oakwood Annex in Montgomery, and his Cadillac’s last trip was to the Hank Williams Museum in Montgomery.

Sadly, the most memorable road stories are those from which there is no return.