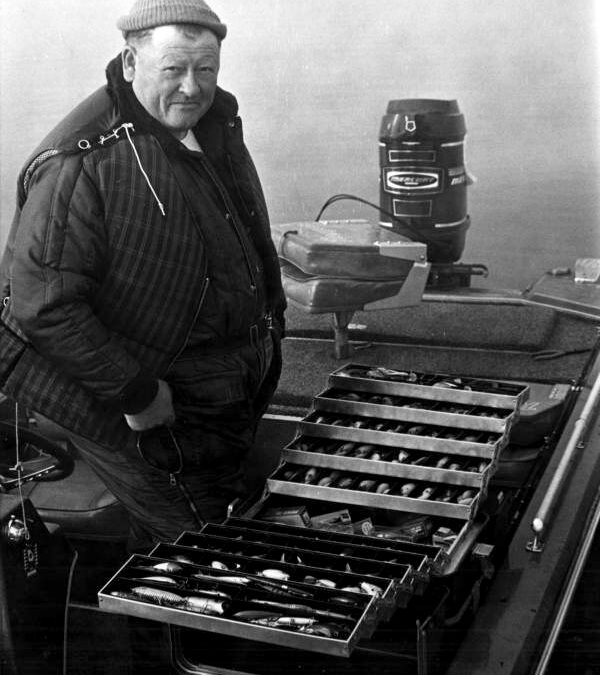 It’s not often a celebrity is so associated with a telephone number that the person can be named with just the mention of the number.

Samples stardom can be credited to a fish. The details of how Samples and this fish became famous differ depending on the source. However, WSM radio and television host Ralph Emery, who interviewed Samples several times when Samples first came to Nashville, told the story in 1967 in the liner notes he wrote for the country comedian’s first album, “The World of Junior Samples.”

“One of Junior’s young sons found the head of a big fish on the shores of Lake Lanier near his home,” Emery explained. “He took it to a racetrack to show his dad, who had taken a few drinks, and, needless to say, was feeling pretty good. Junior paraded the fish among the racing fans and claimed that he had caught a big bass.”

Emery said that a radio announcer covering the races heard Junior’s story and relayed it to his audience. The story of the big fish spread and soon came to the attention of the Georgia Game and Fish Commission who, in turn, dispatched Jim Morrison to the home of Samples with a tape recorder to get Junior’s own account of how he caught the big fish. Morrison’s interview later became the album track called ”The World’s Biggest Whopper.”

Samples claimed the fish was 22.9” pounds and 32” long, which Morrison said would have broken Georgia’s bass record. Trouble was that no one had actually recorded the catch. Actually, the real trouble was that the story was completely fabricated. Samples was just a gifted storyteller, and listening to the interview on YouTube some 40 years later, it’s easy to believe he really caught that fish and ate it in “three messes” without considering it was a record-breaker.

“This is one of my stories that got out of hand,” Samples once said in an interview. “I told Mr. Morrison to forget it, but when he kept insisting that he had to get a story, so I took a drink and told him one!”

Morrison remembered the interview all his life, and shared details with outdoor writer Joel Vance.

“It was Squalor Holler,” Morrison said. “The outhouse was in a corner of a stall in the barn. There were no screens on the windows, and there was trash and garbage laying out in the weeds.”

In the spring of 1966, the original “Big Whopper” interview was broadcast across Georgia through the regular Game and Fish Commission program. Listeners demanded replays, and in 1967 Chart Records president Slim Williamson signed Junior to a recording contract and gained the rights to release the interview as a record. The album came close to breaking into Top 50 Country for 1967.

“This album is the result of one of the most amazing stories I’ve encountered,” Emery said. “Junior Samples is a North Georgia backwoodsman who backed into show business through an amazing set of circumstances that seem more like a fairy tale than that legendary lady, Cinderella.”

Samples appeared on Emery’s radio program and television show, as well as others. He appeared before the Legislature at the Tennessee State Capital. Johnny Cash was so favorably impressed with Junior that he asked him to join his radio show. He was written up in newspapers all over the South and was acclaimed as the comedy find of 1967.

A second album, “Bull Session at Bull’s Gap” was released in 1968. Becoming a celebrity changed the lives of Samples, his wife, Grace, and his six kids.

In a 2011 interview with the Gainesville Times, son Howard Samples said, “We didn’t have nothing. We never had running water till 1968.”

Samples built a new home and bought a new car, but he otherwise remained unchanged, his son confirmed.

Shortly after the show’s premiere in 1969 Samples signed on at Hee Haw, where he became an audience favorite, easily forgiven for his misreading of cue cards and beloved for his deadpan delivery of cornball jokes. He supplemented his own stories with harmonica performances. His regular appearance on the couch of the simple-minded, lazy Culhanes of Cornfield County and his long-running used-car salesman gig at Samples Sales were highlights of the show.

Chart released another album, “That’s a Hee Haw,” in 1970 to capitalize on Samples’ new exposure.

“If you work, you may get down, but you won’t stay down,” Samples’ advised his children, reflecting the simple country work ethic of a man who never expected to be a celebrity.