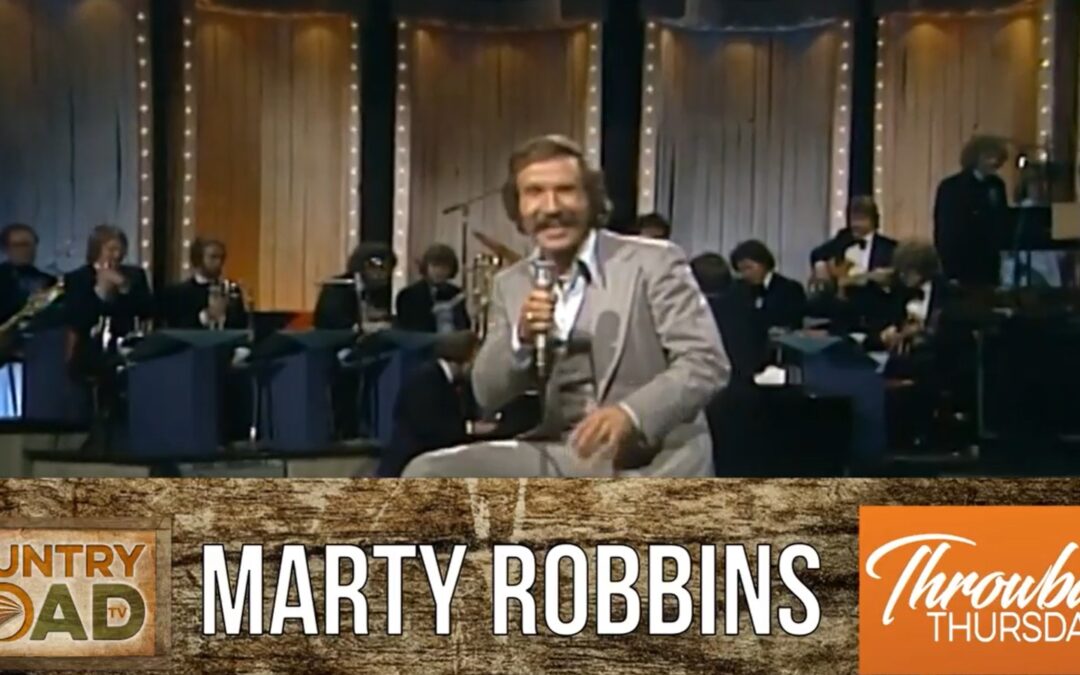 Maybe it was those tales of the American West that his grandfather told him. Maybe it was just what came naturally to him after he taught himself how to play guitar in the Navy during World War II. Whatever gave Marty Robbins the imagination, skill and giddy-up to write hit after hit made him a legend.

Robbins went on to host his own TV show on KPHO-TV, meeting Little Jimmie Dickens when he made a guest appearance on the show. Dickens introduced Robbins to Columbia Records and the music lovers have benefited since.

“A White Sport Coat (and a Pink Carnation)” was released on March 4, 1957. Robbins wrote the Rock and Roll song in 20 minutes, inspired by looking out the window of a car and seeing all the teenagers getting prepared for prom. The song became Robbins’s third No. 1 hit and sold more than a million copies. It was declared Gold and reached No. 1 on Australian charts. “A White Sport Coat (and a Pink Carnation)” became a hit for later recordings released by Terry Dene, The King Brothers, Johnny Desmond and Jimmy Buffet.

“El Paso,” written by Robbins was the first track released in September 1959 from “Gunfighter Ballads and Trail Songs.” It became a major hit on both Country and Pop charts and also received the Grammy for Best Country & Western Recording in 1961. The Grateful Dead, Michael Martin Murphy, the Mills Brothers, Tom Russell, Max Staling and many others have covered “El Paso.”

“Big Iron,” a track on “Gunfighter Ballads and Trail Songs,” was released in September 1959. Robbins tells a story of a town, Agua Fria, that fears an outlaw named Texas Red will kill their ranger. In the end the ranger kills Texas Red with his gun, which is referred to as “the big iron on his hip.” “Big Iron” reached No. 5 on the Billboard Country Chart. Robbins wrote 1961’s “The Hands You’re Holding Now” for Country Music artist, Skeeter Davis. It reached No. 11 on the Billboard Magazine Hot C & W Sides chart.

“Don’t Worry,” written by Robbins reached No. 3 on the Hot 100, making it a successful crossover hit. Robbins wrote “I Told The Brook” in 1961. Billy Thorpe later recorded the ballad.

1962’s “Devil Woman was the seventh single pinned by Robbins to reach No. 1 on the Country charts. It peaked at No. 16 on the Pop chart. The song has been translated to several languages, including Spanish and Serbian. Trini Lopez also recorded “Devil Woman” in 1968.

Robbins’s tenth No. 1 single, “Begging to You,” spent 23 weeks on the charts in 1963. “Tonight Carmen” spent one week at No. 1 and 12 weeks on the charts in 1967. Numerous artists have recorded “You Gave Me a Mountain,” which Robbins wrote about personal struggles and setbacks. The passionate and meaningful words reminds listeners to be strong and grateful. 55 year-old Frankie Laine’s 1969 version of the song was even more successful than Robbins, reaching No.  24 on the Billboard Hot 100 and remaining on the Top 40 for seven consecutive weeks. Robbins’s 1970’s hit, “My Woman, My Woman, My Wife,” spent a week at No. 1 and won the Grammy for Best Country Song in 1971.

He wrote the 1972’s, “Kate” for Johnny Cash. It was the third single from Johnny Cash’s album “A Thing Called Love.” It reached No. 2 on Billboards Hot Country Singles chart and reached No. 1 on the Canadian Country charts as well.

“El Paso City” was written and released by Robbins in March 1976. The song is a revised, sequel-like version of Robbins’s 1959 hit, “El Paso.” The hit reached and remained No. 1 on Country Charts for two weeks.

Robbins was a prolific writer, penning such memorable songs as “Sugaree,” “San Angelo,” “Pain and Misery,” “Tennessee Toddy,” “The Cowboy in the Continental Suit,” “Pretty Words,” “Old Red,” “A Castle in the Sky,” “All Around Cowboy” and “Cigarettes and Coffee Blues.”

Robbins recorded more than 500 songs and won two Grammy Awards. He was named The Artist of the Decade (1960-1969) by the Academy of Country Music. A personal accomplishment rare in the entertainment business was that he had been married to his wife, Marizona, since 1948 when he died on Dec. 8, 1982.