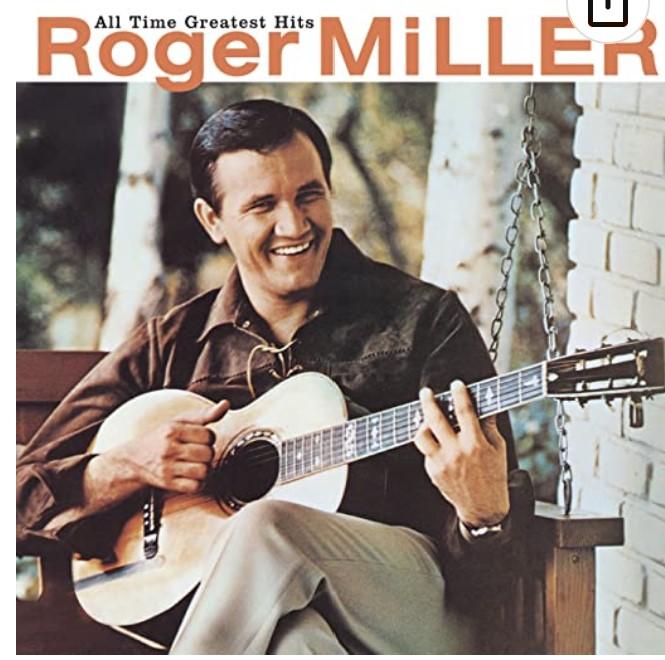 Country Music’s King of the Road, Roger Miller, is remembered as a multi-faceted artist who was as accomplished in writing music as in singing or playing drums, banjo, piano, fiddle or guitar.

The Oklahoma raised Miller was only a year old when he lost his father from spinal meningitis. Miller was born in 1936, the height of the Depression, and being the family clown, he learned how to make light of his circumstances.

“We were dirt poor,” he once explained. “What I’d do is sit around and get warm by crawling inside myself and make up stuff… I was one of those kids that never had much to say, and when I did it was wrong. I always wanted attention, always was reaching and grabbing for attention.”

Miller enlisted in the Army during the Korean War, but eventually ended up assigned to special services in Atlanta, Georgia, where he became a part of the Circle A Wranglers, started by PFC Faron Young. Later Miller played drums for Young, and Young recorded a song Miller co-wrote with George Jones, “That’s the Way I Feel,” that made it to the top ten in 1957.

During his early days in Country he was given an opportunity to play for Chet Adkins, was a bell boy that had the most entertaining elevator ride in Nashville when he sang for patrons, played the fiddle for Minnie Pearl, was a drummer for Ray Price and over the years wrote dozens of songs for some of Country’s hit makers. Miller’s first songwriting job was with Tree Publishing for a salary of $50 a week.

“Before the days of ‘Dang Me,’ ‘King of the Road’ and such, I was a young, ambitious songwriter walking the streets of Nashville, trying to get anybody and everybody who would to record my songs,” Miller wrote in the liner notes for his 1970 album A Trip in the Country. “All in all, I wrote about 150 songs for Ray Price, George Jones, Ernest Tubb and others. Some were hits, and some were not. Here are a few of the better ones. In the beginning, I created heavenly, earthly songs.”

He penned “Half a Mind” for Tubb. Ray Price recorded Miller’s “Invitation to the Blues,” that went to No. 3 on the charts. Beloved Country star Jim Reeves recorded Miller’s “Billy Bayou,” which spent 25 weeks on the Country Charts and five weeks at No. 1, and had another hit with Miller’s “Home.” Eddy Arnold took “The Last Word in Lonesome Is Me” to No. 2.

“Dang Me” was the first successful chart- topper Country hit for Miller and the first of 10 Pop genre hits. It won a Grammy for the Best Country & Western Song and was later covered by artists such as Johnny Cash, Johnny Rivers and Sammy Davis Jr.

Chug-a-Lug reached No. 3 on U.S, Billboard Hot Singles Chart and No. 9 on the Billboard Hot 100 in 1964. The true story of Miller’s friend who could drink one beer after another for a substantial period of time had a light- hearted rhythm. It was the second song released after Miller made a deal with Smash Records to record 16 sides for $1,600 in cash. All the songs were written, recorded and performed by Roger Miller.

In 1964 “King of the Road,” the story of a hobo, was Miller’s fifth single for Smash Records. “King of the Road” was No.1 on U.S. Country Charts and labeled a crossover hit. It reached No.4 on the Billboard Hot 100 and No. 1 on the UK Singles Chart.

In addition to being covered by artists of all genres, the song has been featured in movies Brokeback Mountain, Talladega Nights: The Ballad of Ricky Bobby, Into The Wild, Travelers and Swingers.

1965’s “England Swings” was Miller’s 11th single on the Country Charts that reached No. 3 and No. 8 on Billboard Hot 100. It also reached No.13 on the UK Singles Chart and was covered by Petula Clark and Pat Boone. Later, Keith Urban included his rendition of the song featuring The Wiggles on the Australian version of “ Let’s Eat” in 2011.

“Old Toy Trains” was written by Miller about his son, Dean Miller, now an accomplished singer-songwriter himself, who was two years old when it was released in 1967.

Miller composed and performed a number of songs in the Disney production of the cartoon Robin Hood. The Roger Miller song “Whistle-Stop” was whistled by the rooster character Alan-a-Dale. Other Miller songs sung by him included “Oo-De-Lally” in two versions and “Not In Nottingham.”

He co-wrote Dwight Yoakam’s hit “It Only Hurts When I Cry” from his 1990 album.

In 1973 he was voted into the Nashville Songwriters Hall of Fame and in 1995 was inducted into the Country Music Hall of Fame. He has a road and museum named after him where he was raised in Erick, Oklahoma. In his career, he received 11 Grammy Awards for his own recordings. His songs “Dang Me” and “King of the Road” were included in the Grammy Hall of Fame. The Academy of Country and Western Music named Miller “Best Songwriter” and “Man of the Year” in 1965, the same year Jukebox magazine awarded him Artist of the Year. CMT ranked Miller No. 23 of the 40 Greatest Men of Country Music.

“Everything he said was a potential song,” record producer and music publisher Buddy Killen said of Miller. “He spoke in songs.”

Throughout the history of Country Music, thousands of songs have been written and performed. Many of those songs were written by famous performers. Some were written for a star’s own records, while others were created to be sung by another artist. This story is part of the Singer-Songwriter Series that explores some of those talented individuals whose work we know and love that have been published in our magazines.