Roseanne Cash – A Legacy of Her Own 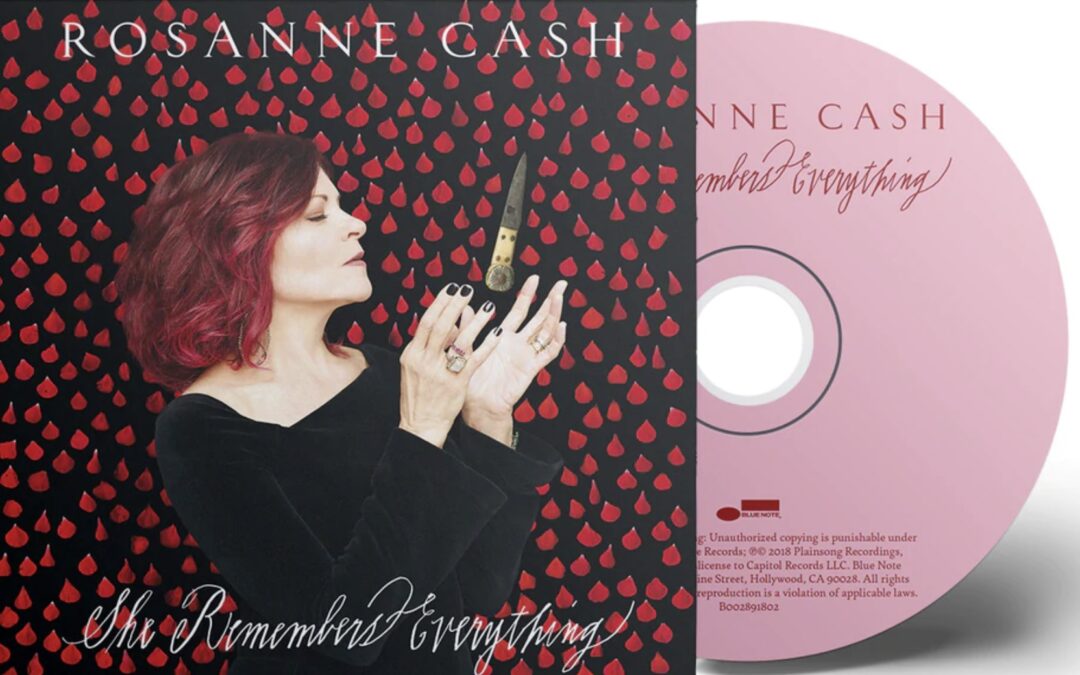 Singer-songwriter Roseanne Cash began life in the musical river town of Memphis, Tennessee, the daughter of Vivian Liberto and Johnny Cash, a Country singer who was not yet the legend he would become. The Cash family relocated to Los Angeles, California, in 1958 when Roseanne was three. After her parents divorced in 1966, 11-year-old Roseanne moved to Ventura, California, with her mother and siblings, graduating from St. Bonaventure High School in 1973. She soon began traveling with her father, who was a star by that time, first working as his wardrobe assistant and eventually becoming a backup singer and occasional soloist.

Cash first recorded Kris Kristofferson’s song, “Broken Freedom Song,” in 1974 on her father’s album, “Junkie and the Juicehead Minus Me.” She spent a year in London, England, working for CBS Records, but she returned to Nashville, Tennessee, in hopes of graduating from Vanderbilt University. However, she decided to go back to California to study method acting at Lee Strasberg Institute.

By 1978, Cash had decided that pursuit of a musical career was more appealing than her acting classes and released a self- titled album. The album was mainly produced in Munich, Germany, but three tracks were recorded in Nashville and produced by talented singer, songwriter and producer Rodney Crowell.

Although the album was never released in the United States, it caught the attention of Columbia Records. Cash began playing with Crowell’s band, “The Cherry Bombs,” and the pair fell in love while working together. Cash and Crowell were married in 1979 and soon after she began working on her next album. In 1980 Cash’s album, “Right or Wrong” produced the hits, “No Memories Hangin’ Around,” “Couldn’t Do Nothing Right,” and “Take Me, Take Me.”

In 1981 the couple settled in Nashville, and Cash gave birth to their child. She was also working on what has become her signature album, “Seven Year Itch.” The title track reached No. 1 on the Billboard Country Chart and No. 22 on the Billboard Pop Chart. Cash went on to release a 1982 album, “Somewhere in the Stars.”

In 1992 Cash divorced Crowell and in 1995 she remarried songwriter and producer, John Leventhal. Together they co-produced Cash’s album, “The Wheel,” a memoir of her marriage to Crowell.

Cash has been nominated for 15 Grammy Awards, and she has won four of them. She has released 15 albums and has had 21 top 40 hits. 11 of the top 40 hits were number one singles. Cash is an author of four books and countless essays, some of which have appeared in The Rolling Stone, The New York Times, The Nation and The Oxford American.

Cash was awarded with an honorary doctorate from the Memphis College of Art, where she gave a commencement speech for the graduating class of 1997. Cash became pregnant with her fourth child, Jakob, in 1998. She put her career on hold and left her album, “Rules of Travel” undone until it was released in 2003. Cash and her father joined together in the track “September When It Comes,” the last recording Johnny made before his death in September 2003.

Cash developed a polyp in her vocal cords and was unable to sing for two years. During her healing process she began writing a children’s book, “Penelope Jane: A Fairy’s Tale.”

In 2006 she released her album, “Black Cadillac.” The album commemorated the loss of her father, Johnny Cash, her mother, Vivian Liberto, and her step-mother, June Carter Cash. “Black Cadillac” was nominated for the Grammy Award for Best Contemporary Folk/ Americana Album.

In 2007 Cash was diagnosed with Chiari Malformation, a disease that can cause deafness, paralysis and death. She underwent surgery and was forced to relearn speech patterns, but she was not defeated. In 2008 she returned to the stage and in 2009 she began a project called “The List.”

When Cash turned 18, her father gave her a list of what he thought were the 100 most essential American songs. “The List”  had 12 songs and included duets with Bruce Springsteen, Rufus Wainwright, Elvis Costello and Jeff Tweedy. “The List”won the Americana Music Album of the Year. Cash’s next album, “The River and The Thread” received three Grammy Awards. In 2010 Cash’s childhood memoir, “Composed,” became a bestseller.

The star is involved with Children Incorporated, an organization that educates needy children. She is a member of P.A.X. which works to prevent gun violence among children. Cash has also worked with Arkansas State University on an initiative to raise money to restore the home of her father in Dyess, Arkansas.

She served as 2015- 2016 Artist-in-Residence at the Country Music Hall of Fame Museum in Nashville, Tennessee, and continues to perform for audiences at home and abroad.